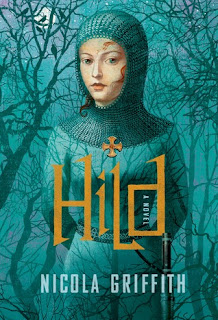 Seventh-century Britain: Hild is born into an uncertain world where many kings vie for power. One small mistake, one illness, or a death in childbirth can change everything. During Breguswith's pregnancy, she had predicted that Hild would be "the light of the world," and so taught her to make prophecies even as a child. When Hild was three her father was poisoned, leaving her mother Breguswith alone with her two daughters. With nowhere else to turn, they went to the court of King Edwin, Hild's uncle, and she was raised as his seer.

Hild was less a seer than a keen observer, thinker, and guesser. Though confident in her abilities, she always knew that if she let him down she could be killed. Late in the book she made an especially important prediction that was obviously just a guess, and I couldn't help but admire how she patiently and calmly waited to find out the truth.

Political machinations always confuse me and there was a great deal of that here. It was difficult to keep track of all the people and places and sometimes I was confused about where a name was even a person or a place, never mind how they were related to the story. It was stylistically challenging as well, the writing reminding me most of A Game of Kings and Wolf Hall (though I liked this much better than Wolf Hall.) There were a few times that I reread a paragraph, especially those filled with various names and places, and felt rather stumped about what it was actually saying and I couldn't help but feel that I'm not really smart enough to read this. But I applied the same method I did to War and Peace; I just kept going without worrying too much about understanding every little detail. This worked pretty well. I know if I went back and read the whole thing again it would probably make more sense, but I won't be doing that.

Included in the book are a map (useful), glossary (useful), pronunciation guide (somewhat useful), and family tree (also just somewhat useful.) More helpful would have been a list of all the characters and a descriptions of who the hell they are. I can't tell you how many times a name was mentioned as though I should know who they were and I swear I hadn't seen it before. There were SO many characters in this book, and many of the names were similar (frustratingly like Game of Thrones, except that in this case many of the characters were real, so it makes more sense.) I kind of wish I had listened to the audio while reading, just to get the correct pronunciation. The guide in the back helped in some cases, but not all.

Lest you get the false impression that I didn't like the book, let me share my favorite parts. Hild was a super intriguing character who had complicated relationships with others, especially her mother. Breguswith was also rather fascinating and probably would make a great protagonist herself. Female characters all have a gemaecce, which is a formal friendship or partnership. It's like you are paired with a friend who you are stuck with for life, but in a good way. Griffith apparently created this term, but I kind of wish it was a real thing.

Marriage at this time was economic and political, but these characters found romance and pleasure in many forms. In the pre-Christian era apparently nobody cared who you had sex with or what gender they were. (Can we please go back to that? Thank you.) This was another of my favorite aspects of the novel, the way in which these people took pleasure where they could get it. It didn't hurt anyone, and made their short dangerous lives more enjoyable.

I really liked the descriptions of all the details of day-to-day life. My favorite part of reading historical novels is getting a taste of what it was like to live in that time and place and this novel was dense with such detail.

I was reading this in late January and early February, and I particularly loved this February conversation between Hild and her friend/half-brother Cian:

"The weather's changing," she said.
"It will never change. It will be like this forever. We will grow old and die and be forgotten, and the foxes will gnaw at our bones."
He always got like that after spending too much time indoors.

Winter is the perfect time to read this novel.

The ending was so intriguing and man, I want to talk to someone about it. Decisions were made that confused me a bit (as usual, I didn't quite understand the political situation involved) but also it was just...an unusual situation in other ways.

So I spent almost two full weeks reading this, felt a huge sense of accomplishment when I finished, went to Goodreads to mark it finished, and saw that it's listed as Light of the World #1. Now I feel rather deflated because this book is only the beginning. The second book isn't even listed yet so it's likely that by the time it comes out I won't remember much about this one. I'm definitely curious about what happens next because the ending, while not a cliff-hanger by any means, really kind of made me want to continue with the story. I have questions.

Since this book was published a few years ago, I've been drawn to the gorgeous cover, and I'm pretty sure it is that more than the rave reviews that really convinced me to read such a lengthy book. But I do need to credit my librarian friend Rebecca for telling me how good this book is, and that it's very dense but worth it. When the mother of a toddler tells you that a long dense book is worth the time and effort, you listen. The contents definitely live up to the cover. It's so complicated and beautiful and there is so much to talk about - I could actually go on for quite a while about this novel.

Hild is part of my 2016 TBR Pile Challenge, but also counts for Winter Bingo as a friend's fave. I've marked this off below, and also put a checkmark on the free square to make it more visually complete. Bingo! I only have a few more weeks for Winter Bingo and I've got two more books I'm hoping to read that I think will qualify. Neither will result in another bingo, but at least a couple more spots might get checked off. 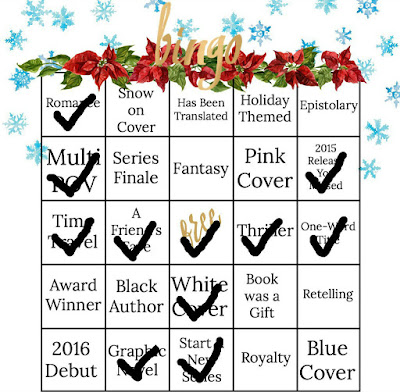 I wish I could have talked to you right after I read this book. I loved it--it was such a dense, complex book and it really created an atmosphere that stuck with me for weeks after finishing the book, that I kept wanting to go back. She really brought this time period to life, in a way that nothing else I've read has (and I studied the Middle Ages in college.) However, now it's been months, and I don't remember how the book ended. I'll definitely read the second installment...but I will have to reread or at least skim this book first, a daunting task as you say. Reading it does feel like an achievement!