A Rogue By Any Other Name 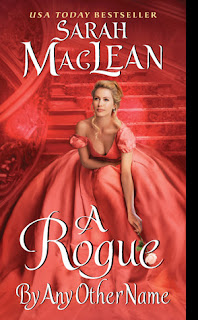 I've already read the fourth in this series, Never Judge a Lady By Her Cover, and I liked it so much I decided to go back and try this first one. Each book in the series is about one of four owners of a "gambling hell" (a casino) called The Fallen Angel. In this first volume, the Marquess of Bourne is set on reclaiming the fortune he lost many years ago in a wager, and then taking revenge on the man he lost to. However, the fortune is suddenly part of the dowry of Lady Penelope Marbury, on the verge of spinsterhood after a scandalous broken engagement years ago. The two knew each other as children, but that was long ago and Michael has obviously changed a great deal. The friend that Penelope remembered would never have forced a lady into marriage just to get a piece of property.

This is an interesting setup, the book beginning with an unwanted marriage and then going from there. It's apparently not an uncommon trope, one that I can see working pretty well for historical novels (though less effectively in a contemporary.) Here it worked well. Marriage at the time was often based on social or economic considerations, and thought Penelope had really hoped for a love match, she was resigned to her fate. I really felt for her during the long days and nights of her new husband's absence, during which she would be stuck at home (the aptly named Hell House), frequently staring out the window watching for Michael's carriage and wishing for adventure.

She got adventure though, when she finally took matters into her own hands and visited The Fallen Angel, which Michael was quite unhappy about. What made their relationship so interesting wasn't even the marriage of convenience, it was their shared history. Michael had become a pretty cold, driven man but deep down he couldn't quite forget how much he cared for Penelope, no matter how much he tried. When she approached danger or when another man acted interested in her, Michael reacted pretty harshly and protectively. Their relationship was borne out of a lot of really conflicting feelings, but I found it convincing.

Penelope's younger sisters were also integral to the plot, as part of the reason she relented to marry Michael was in hopes of his help finding good matches for them later. There were a lot of high-stakes deals in this novel, and I don't just mean at the gambling hell. One of her sisters, Pippa, was far too smart for the dimwit she was about to marry, though everyone including Pippa seemed to think it was nevertheless a good match. And that was about all one could hope for; it was ridiculous and risky to hold out for a perfect match, or a love match. Though I think Pippa eventually gets hers, since she stars in the second book in the series, which interests me just based on how smart and eccentric she is.

Another character I wish we saw more of was Michael's housekeeper Mrs. Worth. She was young for a housekeeper, and talked to Michael in a way that nobody else in the story could get away with. What Penelope first noticed about her was how beautiful she was, but she also has a potentially interesting back story. I was hoping she would have a larger part, or be featured in another book in this series, but I guess we have to settle for just a glimpse of her.

All in all, the story and the progression of the romance was satisfying. Each chapter began with letters between Penelope and Michael from when they were younger, though as the novel progressed, the correspondence became decidedly one-sided, which was kind of sad. I liked how this part of their background was shared throughout the book, adding depth to the current story. Michael was maybe not my favorite romantic hero, as he was so hell-bent on revenge for the past he kept screwing up the present. But that's why Penelope was there I guess, to knock some sense into him.

I think I still liked Never Judge a Lady By Her Cover better, but I still liked this enough to read more by Sarah MacLean. I have another book from this series, and I'm also interested in her new Scandal and Scoundrel series, which begins with The Rogue Not Taken. It's really all about the clever, hilarious titles, isn't it? Though MacLean is also great at writing strong female characters and snappy dialogue, so her stories are quite a treat.

A Rogue By Any Other Name is part of my TBR Pile Challenge, which means that I've now finished 3 out of 10 on my list. It's tempting to think that I'm way ahead of the game, but I'm really just front-loading because by late summer I'll be bogged down with reading for the Community Read and won't have time for these at all. And I haven't even started on anything for my Shakespeare Challenge, though that is up next, I think.

Additionally, the pink cover fills a square for Winter Bingo! At least I think it is pink? Sometimes it looks more red, but when I focus on the dress it looks pink. Maybe it's just my monitor - I read the ebook so the cover appears black and white on my nook. At any rate, I'm taking it. Here's my updated Winter Bingo card! 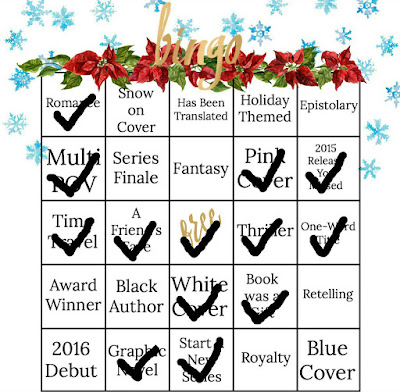