Harry Potter and the Goblet of Fire

Harry Potter and the Goblet of Fire by J.K. Rowling (2000), narrated by Jim Dale 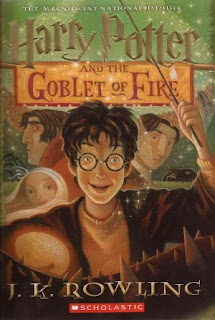 (This post contains spoilers, so beware if you haven't read this book or watched the movie.)

In this fourth installment of the Harry Potter series, the Triwizard Tournament is taking place at Hogwarts. Two other wizarding schools have brought students to enter the competition along with students from Hogwarts. Those who wish to enter must be at least 17, and they enter by putting their name on a slip of paper and dropping it into the Goblet of Fire. The Goblet then chooses a Champion from each school to compete. The three contestants must all complete three difficult tasks to gain points and win the Triwizard Cup and a monetary prize. On the day the three Champions were chosen by the Goblet of Fire, it unexpected chose a fourth: Harry Potter. This was a surprise because not only was it unprecedented to have a fourth contestant, and not only was Harry to young to compete, but he didn't actually enter.

In addition to the Triwizarding events, the school year proceeds as usual. This year's Defense Against the Dark Arts teacher is Mad-Eye Moody. He's an auror- something new we learned about in this book- who are highly-trained officers for the Ministry of Magic who hunt dark witches and wizards. This book is also where we learn of the three unforgivable curses: The Cruciatus Curse, The Imperious Curse, and Avada Kedavra, the Killing Curse. Another character we meet for the first time is Rita Skeeter, a reporter prone to exaggeration who starts all sorts of rumors that cause trouble for Harry this year. Also, we were introduced to nifflers, which I would have completely forgotten about had I not just watched Fantastic Beasts and Where To Find Them (an entertaining enough movie that was pretty thin on plot.)

This is also the book in which Ron is an asshole to everyone. When Harry is chosen for the Tournament their friendship suffers. Ron won't believe that Harry didn't actually enter. He was also an insensitive jerk to Hermione when it came time to pick dates for a big ball and Ron assumed he'd be able to go with her as a last resort. He was very surprised to find out that she already had a date. (It's some comfort to know that his appreciation for her increases a lot later.) As much as I wanted to smack him, I'm enjoying the way their friendships all change and grow over the years.

The part I kept dreading was the very sad death of Cedric Diggory. But it was followed by a rousing speech by Dumbledore, which struck me so much I'm going to share the whole thing here:

"I say to you all, once again -- in the light of Lord Voldemort's return, we are only as strong as we are united, as weak as we are divided. Lord Voldemort's gift for spreading discord and enmity is very great. We can fight it only by showing an equally strong bond of friendship and trust. Differences of habit and language are nothing at all if our aims are identical and our hearts are open.

It is my belief -- and never have I so hoped that I am mistaken -- that we are all facing dark and difficult times. Some of you in this Hall have already suffered directly at the hands of Lord Voldemort. Many of your families have been torn asunder. A week ago, a student was taken from our midst.

Remember Cedric. Remember, if the time should come when you have to make a choice between what is right and what is easy, remember what happened to a boy who was good, and kind, and brave, because he strayed across the path of Lord Voldemort. Remember Cedric Diggory."

Dumbledore's warnings about Voldemort and and pleas for everyone to come together have a very familiar ring to me right now, in 2016 in America. It's also an ominous warning of things to come, because it is here that these books begin to take a pretty dark turn. I'm very much looking forward to the last few books in the series.

I was worried about listening to the audio of this one because it's SO much longer than the others, and longer than any audiobook I've listened to before. It helps that it's not my first time with the story because it really did take me a few weeks. The 21 hours was long, but the next book is 27 so that's potentially an extra whole week. However, I think I'm up to it and the last two are a littler shorter again. I'm looking forward to finishing this series in early 2017!
Posted by 3goodrats at 9:06 AM