Unmentionable: the Victorian Lady's Guide to Sex, Marriage, and Manners by Therese Oneill (2016) 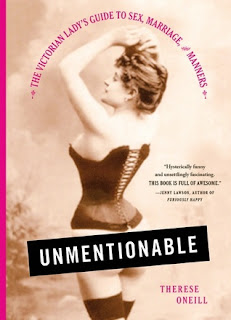 Newly-published in November, this guide to Victorian day-to-day life for women focuses on the less-revealed details of sex, menstruation, bathroom habits, birth control, and marriage. Presented as a guided tour to someone traveling from the 21st century, the second-person narration uses information primarily from contemporary guides to instruct the reader in how to behave and take care of herself in the Victorian period.

Generously illustrated with photos and advertisements, it was a speedy whirlwind tour through life in the 1800s. In addition to the scandalous subjects above, Oneill also delves into diet, bathing, hysteria, and general social manners, so the more (scandalous) topics didn't get quite the in-depth treatment I was hoping for.

So what tips and advice can you hope to learn from this colorful guide? For one, you learn that women didn't wear underwear during this period because of the logistics involved in squatting over a chamber pot wearing a cage crinoline. In the chapter on bathing you learn about all the heavy floral perfumes everyone doused themselves in to hide their stink. (The author was clear that the Victorian period was quite aromatic.) The most common and effective method of birth control at the time was withdrawal, which was considered almost as dangerous as masturbation since it has the same result (i.e. "wasting seed") and could cause all manner of disastrous health conditions, such as sterility, vision problems, memory loss, and uterine disease. (Aren't you glad we have better birth control these days? Ha!)

Although I think there is some good information here, the style is so unrelentingly tongue-in-cheek I wasn't sure how much to believe and how much was exaggeration added for comic effect. The bibliography consists primarily of books of advice from the time, and though they're certainly a window into the mindset that prevailed in terms of what was published, that's like using Martha Stewart Living or Cosmopolitan to describe how women live in the 21st century.

It's fun to mock Victorian people and their silly ill-informed ways, and if you learn something along the way, that's great. But I'm not overly fond of ridiculing and dismissing people of the past just because they didn't know what we know now. I'd rather know why they thought the things they thought and lived the way they did but the author didn't examine the broader context. There were even a couple of parts where she asks questions for humor's sake that she should have been able to answer. ("What does a hall usher even do?" Well, you're the one researching the period for this book, so you tell me.)

However, it doesn't promise to be scholarly. In the introduction (titled "Hello, Slattern" - that was my first clue) the author says we'll be traveling between social classes, geographic area, and time, and may go a bit outside the bounds of the Victorian era "...the better to broaden your experience. Or just because it pleases me." And obviously any serious study isn't narrated by someone who continually addresses the reader as "lambkin." So I guess we shouldn't expect it to be anything but light-hearted humorous infotainment.

Despite its imperfections, I found this book rather fun and I recommend it if you're looking more for humor than education, but for a more thorough examination of the time I'd recommend the far superior How To Be a Victorian by Ruth Goodman.
Posted by 3goodrats at 11:32 AM

Bummer that it wasn't quite what you were expecting! I was hoping for a fun but educational book too... maybe I'll have to reconsider and check out the other one you recommended instead. (I'm pretty sure I've got that on my to-read list already.)

Total sidenote, but I know you enjoy Russian settings and you'd probably enjoy the book I'm reading at the moment, "The Bear and the Nightingale"!

I noticed that you were reading that book and I *am* very interested! I actually had a galley of it, but I gave it to a family member since I can easily get it from the library once it's published. Definitely on my radar!