My Sister Rosa by Justine Larbalestier (2016) 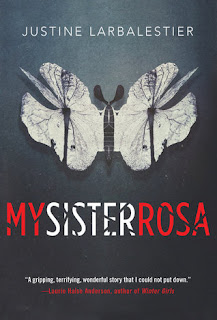 Che is from Australia, but his family has been moving around for years, and now they are going to New York. His parents start up socially responsible companies and sell them, and his ten-year-old little sister is a psychopath. Literally. Che has been trying to keep her in check for years, alone, because nobody else will believe him that she is dangerous. With her blond hair and dimples, she's a picture of innocence and knows how to charm everyone. But Che isn't fooled. He just hopes he can keep her under control before she really hurts someone.

Just released in November, I've had my eye on this book for a while. The premise is incredibly intriguing, and I'm happy to report that Larbalestier does an amazing job delivering on it. Rosa is creepy! Super creepy! And there's more going on in the family that makes it even more complicated than it seems at first. I loved everything about it.

This is supposed to be a book for teens, and it definitely has teen appeal. Che is seventeen, and in addition to his problems with his sister, he's going through some typical teenage boy issues. He's really into boxing, but his parents think it's too violent so they've made him promise not to spar. But he really wants to and knows it will improve his overall skill at the sport. He also desperately wants a girlfriend and has a huge crush on Sojourner, another boxer at his gym. But she's super religious and said up front that even though she likes him, she won't date someone who isn't also religious. So, typical teenage boy struggles on top of the atypical ones. But the writing is more dense than is typical in a teen book and it's not as quick to read. Still, I read the last 150 pages in one sitting because I couldn't put it down.

The way the story of Rosa progresses is incredibly well done. She manipulates everyone around her to her advantage and it was totally believable. Her conversations with Che, who she is pretty honest with about her peculiarities, were positively chilling. He tries to teach her to have empathy for other people, but all she is doing is trying to appear like a regular person and it's clear she's been honing her acting skills since she realized that she's different from most people. I was so worried for Che and the people he cared about, and wanted to smack his parents for being so disinterested, and so convinced that Rosa is just precocious.

I was very happy that, just like in Liar, Larbalestier included diversity elements, but even more so in this book. Sojourner is black and has two moms, another friend is gender fluid, and another is Korean-American and a lesbian. But none of this is a big deal, or even especially surprising to Che, though he is slightly confused about the gender fluid character. (Not confused in a bad way though, he totally likes Elon, he's just unsure what gender this person is and has to have it explained to him.) I hate to even mention these elements because it shouldn't be a big deal, but I think it's important to give a shoutout to books that normalize non-white-heterosexual-cisgender characters. In this book they are all just people who are well-rounded and have hobbies and interests and just happen to be a minority. There was a great conversation between Che's friend Leilani and her girlfriend about whether or not she is "really" Korean since she was born in America and doesn't look very Korean, and because her Korean dad was adopted by a white American couple. There are so many conversations like this in real life and it's so important to talk about this kind of thing.

In summary, you should read this right now! Just go immediately to a bookstore or library and get it as soon as possible.
Posted by 3goodrats at 12:24 PM