Born a Crime: Stories From a South Africa Childhood by Trevor Noah (2016) 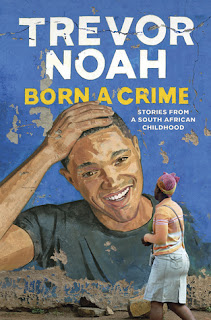 You may know Trevor Noah as host of The Daily Show, a job he took over from Jon Stewart in 2015. I hardly ever watch tv so I've only seen clips here and there. The reason I picked this book up, though, is because it's all about Noah's life growing up in South Africa in the waning days of apartheid. The title refers to the fact that his mother is black and his father is white, and that sort of racial mixing was illegal at the time. His status as "colored" - the South African term for a racially mixed person - had huge consequences for his childhood.

Noah talks a lot about race in this book, as you might expect. As a kid, his mother wouldn't hold his hand in public and if an authority figure was nearby, she'd pretend she didn't know him. Growing up, he had a tough time fitting in with any of the racial groups. He mentions the way apartheid was taught in South Africa and compares it how racism is taught in America, contrasting it with the way the Holocaust is taught in Germany: "Not just the facts of it but the how and the why and the gravity of it." In America, we learn about slavery and Jim Crow and the Civil Rights movement of the 60s and that's it. I find that so strange and I'm glad he brings it up. I have to wonder what it is about our culture and South African culture that result in a similarly incomplete way of teaching history. He also discusses privilege in the context of making CDs and DJ-ing, which he was able to become successful at only when his white friend gave him a CD writer. You know the saying "Give a man a fish, and he'll eat for a day. Teach a man to fish, and he'll eat for a lifetime." Noah adds his own caveat to it, which is "And it would be nice if you gave him a fishing rod." Another really interesting thing he mentioned is that people in South Africa don't view the Holocaust the same way we do and aren't as familiar with Hitler as villain. Hitler is part of the white world with which they are unfamiliar, but the people of Africa have their own villains in the colonial powers that divided up the continent and exploited its people.

It's not all serious discussion about race. There are also funny stories, like the time as a kid when he burned down some white people's house, and the time he ended up in jail. It's not as funny as listening to him on The Daily Show, but memoirs by comedians are always less funny than their performances because it's not an act, it's real life. I really liked hearing about his everyday life and family. Despite his status as an outsider, and despite his family's poverty, he sounds like he was pretty happy. His life was the only life he knew and it wasn't really worse than anyone around him.

I should also mention that Noah's mom is pretty awesome. This book is as much about her as about him, I think (and in fact it's dedicated to her.) She's a smart, strong woman who never let her son feel like he was less than others because he was of two different races. She played by her own rules too, going wherever she liked and doing what she wanted, even if some of it was understood to be for white people. She prepared her son for the freedom from apartheid that they had no way of knowing would come so soon. She wanted him to know that the circumstances of their lives weren't all there is, that more was out there. Plus she taught him how to be respectful towards women, though she herself was unfortunately in a relationship with someone who did not treat her as she deserved.

At one point I got a little distracted by language, as he mentioned speaking a couple of different African languages, and ended up down a rabbit hole of YouTube videos in the Xhosa language. If you're curious, this one has a bit of Noah speaking Xhosa, which is very cool-sounding.

I knew almost nothing about South Africa before reading this book, and still need to learn more, but I really enjoyed hearing about what it was like to live there during this time, and his perspective on the world was refreshing and different from what I'm used to reading. I'm very glad I picked up this book.
Posted by 3goodrats at 8:22 PM