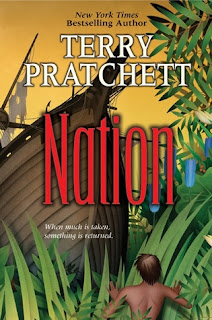 A while back my Not-So-Young Adult Book Group at work read The Amazing Maurice and His Educated Rodents, and now we've read another Pratchett book, Nation. It begins with a wave, so huge that it wipes out everyone on Mau's island leaving him the only survivor. The same wave washed up a ship called the Sweet Judy, with only a young girl left alive. Mau and Daphne don't speak the same language and come from very different backgrounds, but together they help other refugees from the storm and make some remarkable discoveries.

I can see why so many people love this book. Young people rebuilding a society after catastrophe, people from very different cultures trying to understand each other, rejection of colonialism, a colorful cast of characters, and Terry Pratchett's particular brand of humor. The role of religion is a big theme, and lots of other interesting ideas are also touched upon. My book group members had a lot to talk about.

The coming together of religion and science made for some clever little bits and, without spoiling too much, I'll share just one small part. Mau's village had a tradition of making beer from roots, but when it's first made it's referred to as "mother-of-beer" and it's poisonous. Only after spitting into it and singing a song does it transform into something safe (and delicious) to drink. Daphne figures out that the song itself isn't significant, but the time it takes to sing the song. The islanders used the song to measure the time they had to wait between spitting and drinking, and over time began to believe it was the song that made it safe to drink. They had a lot of knowledge that was masqueraded as myth or ritual, and I found this quite inventive.

When the story began, Mau was in the midst of a rite-of-passage that was interrupted and throughout the book he kept saying that he still wasn't a man, and referring to not having a soul. At the same time, he was proving quite the opposite about both of those things. He had major epiphanies and I liked watching his character grow. Similarly, Daphne really came into her own during this situation. Growing up in England (I presume, though it wasn't explicitly stated) she was taught very proper manners and subject to all sorts of expectations and it all went flying over the window as soon as her ship crashed on this island. She clearly didn't fit the mold that girls were supposed to at that time, and it was so great that she had the opportunity to grow and learn as she did in this very different environment.

All that said, I found the book a bit of a slog to get through. It seemed slow, taking me an entire week to read, and while I liked the characters and the plot and some of the themes, somehow I just couldn't really get into it.  It was actually rather well-crafted and I don't feel like I have any legitimate criticisms, but somehow it just wasn't for me.
Posted by 3goodrats at 8:40 PM