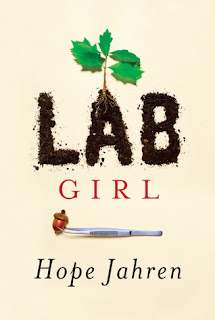 Hope Jahren is an accomplished award-winning scientist, and her memoir is filled with stories from her professional and personal life. From her rural upbringing with stoic parents, to her many adventures in the field, she talks about what it's like to be a woman working in a male-dominated field and about her longtime friendship with a fellow scientist and outcast named Bill. Her stories alternate with short chapters of scientific content about plants and trees.

Jahren grew up in her father's lab, becoming comfortable at a young age with the equipment and other trappings of scientific life. As much as she loves the work, she doesn't gloss over the challenges - funding is a constant source of anxiety, as is the uphill battle of trying to achieve respect in the field, especially if you're seen as an outsider. From the beginning, there were few women in her field and she had to fight stereotypes and convince her peers that she was serious. I wish she had followed this thread a bit more in the book though - she talks about it a lot at the beginning, but later she didn't discuss how being a woman in science changed, or didn't change, and how it may have affected her later in her career.

Her friendship with Bill was a large part of the story. He was pretty stand-off-ish and others didn't take to him the way Jahren did. He was obviously poor and socially awkward, but brilliant, and they became very close friends. He often lived in a vehicle or in a lab, though eventually he secured more stable housing. It was an unusual relationship; they worked together and when Jahren would move away for another job she would take him with her so they could keep working together. It was unclear how she logistically made this happen, but I get the idea that she was given a certain amount of money that would cover hiring lab assistants and that's how she paid him. At any rate, I love how close they were, how they helped each other, and the fun adventures they had on their field trips. We could use more positive portrayals of relationships.

Interestingly, she came across as a total workaholic early in the book and everything was focused on her career and friendship with Bill, and then suddenly she begins a romantic relationship, gets married very quickly, and has a baby. It was a bit jolting. She had made maybe one mention earlier in the book about dating and somehow I was quite shocked that she chose to have a child. The parts about being a mother were so incongruous with the rest of the book, and I still liked these parts, I just think that maybe the different threads of her story weren't woven together well. It's the same for the sections in which she talks about her bipolar disorder - this was a bit more woven in with the parts about motherhood, but I still have a lot of questions about how it may have affected her work.

I learned a lot about plants and trees from the short chapters that focused on botany. Her descriptions of the process of trees shedding their leaves and how plants are affected by things that happened when they were just seeds made me think about plants as truly being alive in a way I hadn't considered before. We think of plants as being so passive just because they don't move in a way that we can see, but they really aren't passive at all. I've been sort of interested in Peter Wohlleben's popular book The Hidden Life of Trees for a while, and now I'm even more likely to eventually read it.

I've seen this book on a lot of "best of" lists and one of my coworkers personally recommended it as well. I found a lot to like here and generally enjoyed reading it, though I do think it was a bit disjointed and lost some of the thematic threads at various points. But overall, I liked it and it gave me a lot to think about. It's only near the end of the book that she mentions the importance of writing to her, and it's true that her writing is quite beautiful, especially when describing the trees and other plants about which she is so passionate. Hopefully this means we'll see more books from her in the future.
Posted by 3goodrats at 12:22 PM