The Price of Salt

The Price of Salt by Patricia Highsmith (1952) 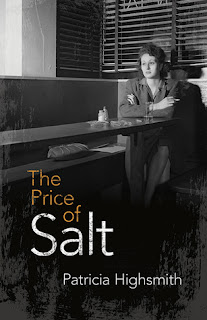 In this lesbian cult classic (which was made into the 2015 movie Carol) the young Therese Belivet meets an intriguing woman, Carol Aird, in the course of her temporary job in a department store. Carol is a few years older, with a husband and daughter, in the midst of a divorce. Therese is instantly drawn to her and impulsively sends her a note after their chance encounter, which sets off a friendship that intensifies into a full-blown romance.

Therese is also in a relationship, with a man named Richard who feels much more strongly for her than she does for him. He quickly becomes impatient at her new friendship, and it causes a lot of friction in their relationship but Therese doesn't care. She cares only for Carol.

When we meet Therese, it's the Christmas season and she had been hired at a department store as an extra, but her real career is as a set designer. Even then, breaking into the theater was tough, and she was still young - I think she was 19 when the story opens - so she has a way to go, though she does get work here and there. But she's lonely. She has no family to speak of, and I think this is partly why she's stayed in a relationship with Richard even though she doesn't love him. Soon, Carol fills this void and they end up sort of running away together.

Carol brings Therese along on a road trip she has planned and this was my favorite thing about this novel. I always love a good road trip. They drive west across the country from New York, stopping in various places along the way. They drink a lot: martinis, Old Fashioneds, brandy, rye, Triple Sec (by itself? I guess?) I think it's the only time either of them have really let loose and lived the way they wanted, and part of this is the eventual consummation of their relationship. It was a very slow buildup, neither of them quite sure that the other felt the same, and of course same-sex relationships weren't really accepted at the time so it was risky.

Highsmith's writing is unembellished and straightforward, the emotions muted. It reminded me of other books written in the early 20th century; full of plain talk that obscures the emotions you know are there, but they aren't directly described. Much of it felt rather empty and lonely and sad, and some parts dragged a bit, but I was ultimately satisfied. I don't think I liked it as much as some people do, but it was pretty solid, and now I'm very curious to see the movie. Many of the scenes evoked strong cinematic visuals while I was reading and I hope the actual movie is similar to the one in my head.

I wonder how this book was received at the time. Fun fact: it was originally published under a pseudonym, which I only know because I spotted a copy in a thrift shop in my hometown a couple of months ago and was confused by the author's name. I thought "Is it possible there's a different book with this title?" But the shop owner told me it was one of the first lesbian novels, so I knew it was the same one.