A Little Life by Hanya Yanagihara (2015) 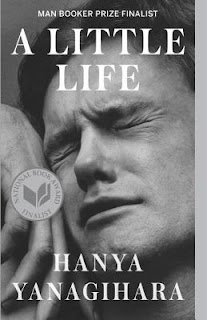 It's hard to begin a post about this book, because it's so huge and emotionally wrenching and starting with a plot summary feels inadequate. When I began reading, I thought it was about the friendship of four guys who all met in college, and it is, but it soon became clear that it's mostly about one of them in particular: Jude St. Francis. His early life was filled with traumatic physical and sexual abuse, which is revealed slowly throughout the course of the novel, though more to us than to the other characters, who are mostly left in the dark. These experiences have stayed with Jude; as physical disabilities, but also in shaping the kind of person he is. He is fearful, he feels worthless, he thinks he is undeserving of happiness, and life is incredibly hard for him. But he's kind to his friends and incredibly smart and compassionate and I wanted more than anything for him to find happiness.

For Jude, life is pain. Ever since his "car injury" which he specifically doesn't refer to as a "car accident" he has suffered intense pain in his legs and back. He's never had anyone who really cared about him. Because of his early experiences he hates sex, and coupled with the fact that he thinks he's ugly and not worth caring for, he doesn't have romantic relationships. He combats his pain with more pain, cutting himself with razor blades late at night when his torment keeps him awake.

In parts, it was hard to read. The descriptions of the sexual abuse Jude suffered as a child wasn't graphically detailed, thank goodness, but it's still incredibly upsetting to read, as were the scenes in which Jude cut himself. Even his relationships with other people were painful. A friend from school ended up being Jude's doctor (even though he wasn't even that kind of doctor) and the more Andy learned about Jude's life - from seeing his scars and learning about the STDs Jude still carried - the more he wanted to help. But Jude was very particular about what he was willing to do. The conversations in which Andy implored Jude to take better care of himself, to eat adequately, to stop cutting himself, were pretty heart-wrenching. His friends knew if they tried to push him too hard, they'd just end up pushing him away, so they were always trying to walk a very fine line between letting him self-destruct and running the risk of losing his friendship.

Jude's closest friend is Willem, and I loved their relationship so much. Willem also suffered losses when he was young and was always the first to defend Jude if one of their other friends complained that he told them so little about himself. It was clear that regardless of what happened Willem and Jude would be there for each other, even more than the other two friends in their foursome, JB and Malcolm.

I've been thinking a bit about unconventional relationships recently and there's a great one in this book. Jude becomes very close to an older man named Harold who, if I recall correctly, was one of his professors and develops a close familial relationship with Harold and his wife, Julia. When Jude is 30 years old, they adopt him. He had never had parents before, so it was a really big deal for him. Even though he's an adult, Harold and Julia want to make their relationship a legal parental one, partly because they want him to be their heir, but also because they just care about him so much. I loved this.

I could go on at length about all the things I loved about A Little Life, and I found little to criticize. Sometimes Yanagihara uses a vague "he" which, at the beginning of a section, was confusing because you'd have to read several sentences before knowing who it's about. There were other times too that I initially thought she was talking about some other character - I don't know why she didn't just use the names in these parts. (But it wasn't nearly as prevalent or irritating as in Wolf Hall.) A few chapters were from Harold's perspective, written in second person to Willem, about Jude, but again I'd have to read several sentences before I could figure that out, and these were also initially disorienting but not for long. Mostly I have questions about why she made these choices, but they really didn't detract from my enjoyment of the story. I think the only thing I don't like about this book is the cover.  It makes more sense now that I've read the book but I still don't like it.

This is not a story for those prone to depression or self-harm. It's not for anyone especially sensitive to reading about child sexual abuse. It's also not, it turns out, the best book to read during a bleak, cold January, especially if you're having an unusually stressful time at work. But if you have the emotional fortitude, it's completely worth it. It's over 800 pages, which is partly why I kept putting it off, but as soon as I began reading I already felt glad it was so long because I wanted to spend as much time as possible with these people in their world. It's very rare that I like a book being this long, so that's pretty much the highest praise I can give it.

This was the first book on my 2018 TBR Pile Challenge. In fact, it was on last year's challenge and I didn't get to it and I'm SO incredibly glad I didn't abandon it altogether. If you've been considering reading this book and aren't put off by all the upsetting aspects, I highly recommend going for it. But I do suggest waiting until spring.
Posted by 3goodrats at 7:34 PM