We Are Never Meeting In Real Life

We Are Never Meeting In Real Life by Samantha Irby (2017) 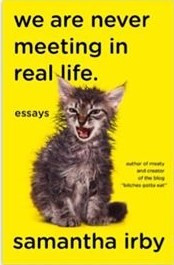 Samantha Irby is known for her blog bitches gotta eat, but I hadn't heard of her until she published this book of essays. I heard that she's hilarious and I think what really sold it for me is that she works for a veterinary clinic and has a psychotic cat named Helen Keller. I'm always up for animal stories, especially ones about difficult pets. She writes about other topics too, like her friendships, parents, anxiety attacks, diet and exercise, and romantic relationships.

The very first essay is called "My Bachelorette Application" which sets the stage nicely by introducing herself with statements like "I'm sucking in my stomach, I've taken thirty-seven Imodium in case my irritable bowels have an adverse reaction to the bag of tacos I hid in my purse and ate in the bathroom while no one was looking, and I have been listening to Katy Perry really, really loudly in the limo on the way over here. I'm about to crush a beer can on my forehead. LET'S DO THIS BRO." I think you can get a decent sense of what she's like from that opening. Other essays include "Do You Guys Pay Your Fucking Bills or What?", "You Don't Have To Be Grateful For Sex," "A Case For Remaining Indoors," "Fuck It Bitch. Stay Fat," "Yo, I Need a Job," and "Feelings Are a Mistake."

She talks a lot about junk food, sex, and pooping. To be honest, I got about halfway through and almost put the book down. It was funny, but there was an awful lot of oversharing and it was a bit much to take. Like, a story about having to stop on the side of the highway for an emergency poop followed by one about sex that makes it sound so very unsexy, and I thought "Is this just going to be one unpleasantly embarrassing situation after another?" The answer is yes, but that turned out not to be such a bad thing. I thought I might just read an essay here, then a chapter of another book, then another essay. You know, so the experience wasn't so intense. But I guess I got over the hump because I was soon zooming through the rest of the book.

The pictures she paints of herself is an awkward introvert who has unhealthy habits and just wants to be left alone with them. In college she became close friends with a couple of guys because she didn't know any other girls who just wanted to sit on the couch for hours watching bad tv and eating pizza rolls. She doesn't want to put a lot of work into relationships and, as a matter of fact, said that ideally she and her partner would live in separate - but nearby - apartments. That is basically my fantasy. Another thing we have in common is that our parents had us late in life and our siblings are much older than we are. INTERESTING. (Oh, she uses a lot of caps and exclamation points. It's a pretty conversationally written book.)

It's also the sort of book where you think she must be exaggerating for comedic effect. I mean, can you possibly be that awkward? And how can someone so funny be as unpleasant as you claim to be? But ultimately it works, so I suppose it doesn't matter how factually accurate it is. If you like self-deprecating humor and need some laughs (and don't mind the TMI and swearing) this book might be for you.
Posted by 3goodrats at 8:45 AM