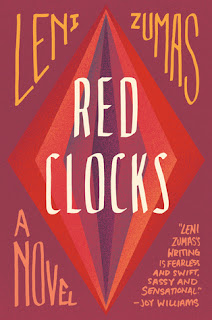 The American Constitution has a new amendment in this brand new novel from Leni Zumas. The Personhood Amendment says that from the moment of conception fertilized eggs have all the rights of any people, which changes everything for women. Not only is abortion illegal again, but so is IVF, as the procedure would move embryos without their consent. The novel moves between several women, identified by their roles rather than their names. Mattie, the Daughter, is a teenager desperate to end her pregnancy. Her teacher Ro, the Biographer, is just as desperate to become a mother, but she is single which greatly limits her options, especially with forthcoming legislation that won't let single people adopt. Susan, the Wife, is a mother of two whose marriage is falling apart. Gin, the Mender, is a healer who lives out in the woods and is often visited by women who can't get what they need from licensed medical professionals.

The women all have a relationship, or at least an awareness, of each other, but of course what unites them are the restrictions placed on them by this society and the roles it envisions for them. Mattie's situation reflects the reality of a country in which abortion is illegal: women try to cross the border or seek out someone who will perform the procedure illegally, often with disastrous consequences. The truly desperate will try to perform it on themselves. Ro is possibly destined to never be a mother. She has tried artificial insemination many times and is on an adoption waiting list, but unless someone chooses her very soon her opportunities to adopt will be over. Gin is somewhat of an outcast, which doesn't help when she is accused of a crime. Her herbal remedies are often sought out by women with a variety of complaints - including unwanted pregnancy - so as much as she is isolated by the community, she is also of great value to them. Out of all of them, Susan is the one who is living the role intended - she's a wife and mother - but she is very unhappy. She loves her kids, but she no longer loves her husband and dreams of once again having a career.

It's actually supposed to be about five women, the fifth being Eivor, a 19th-century polar explorer, about whom Ro is writing a book. But because her snippets are just a few sentences here and there, she isn't brought to life at all. Her story didn't add anything for me and could have just been left out, though I would have preferred it be expanded and made more relevant to the rest of the book because it could have been an interesting story.

Short chapters, some of which are just a few sentences, make for quick reading. The prose itself was a bit stilted at times, and I never quite got into the groove of the author's style. This passage is fairly typical: "House has light so ship won't crash. Light has beam so sea won't swallow. Ship has watchers, wary squinters, men in raincoats scared of dying." It's not all like this - I think maybe it was just Gin's parts, though I'll admit I can't recall for sure if that's the case.

I keep hearing this book described as a dystopia comparable to The Handmaid's Tale. The comparison is understandable but in fact, the setting is just present-day America with one additional amendment to the Constitution, and this similarity to reality makes it all the more unsettling.

I can't say that I loved it, but I do keep catching myself wanting to pick it back up to see how things are going with the characters before realizing that it is over. So maybe my biggest complaint is that there wasn't enough of it. I know a couple of my friends have read it too, so I'm really looking forward to talking with them about it.
Posted by 3goodrats at 10:02 AM