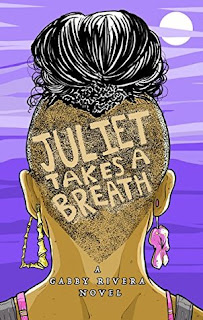 Juliet Palante is a Puerto Rican lesbian in the Bronx who has recently been awakened to feminism through a book called Raging Flower: Empowering Your Pussy by Empowering Your Mind. She is now leaving home to travel to Portland, Oregon for an internship with the book's author, Harlow Brisbane. It's her first time away from her family and away from her girlfriend, and she waits until just before leaving to come out to her family. It's a rather dramatic scene and Juliet ends up leaving on a less-than-positive note. When she arrives in Portland, nothing is quite what she expected and the uncertainties in her life are increased exponentially.

There's a lot she's already trying to figure out, like how to handle her relationship with her family, how to talk to them about being a lesbian, and the meaning of many of the big new ideas she has found in Raging Flower. In Portland, she is now surrounded by all these hippie vegetarian white people and every situation feels like she's landed on a new planet. But I love how she approaches all the new ideas! Even when someone asks her questions that "sound like bait," rather than rising to it she carefully considers what he means by "preferred gender pronouns." She wants to know what everyone is talking about so she can figure out what she thinks of all of it. Juliet is going into everything with an open mind and a genuine curiosity and I love that about her.

As I mentioned, there are a lot of white people in Portland, and the situation is ripe for some discussions about intersectional feminist issues. Although Juliet (and many others) adore Harlow Brisbane and are inspired by her feminism, it becomes clear that she doesn't understand issues particular to women of color, and makes some pretty big mistakes. I like that Rivera doesn't paint Harlow as an insensitive racist lady but just as someone who grew up in a racist society and is a product of that and wants to do better.

In the meantime, Juliet's distance from her girlfriend has taken a toll on their relationship. While doing research for Harlow, she meets a very cute library worker who she begins spending lots of time with. We also see more of her family relationships when she briefly leaves to visit her aunt and cousin in Miami where she learns more about her family and gets an opportunity to talk about her sexuality with family members who understand her more and can help give her advice to repair her relationship with her mother.

This isn't an especially plot-driven novel. Rather, it's a coming-of-age story about a young woman trying to find her place in a feminist landscape carved out for white women. Juliet does find a community of queer women of color during the book, a space in which she feels like she really belongs and people get her. This was so important to her being able to grow as a character.

It's important to note that while this novel contains a lot of discussions about issues and identity, it's also a lot of fun. I swear! Juliet has a great time, meets hot women, impulsively gets her head shaved, and just generally enjoys a lot of what is going on around her. Even dealing with some of Harlow's quirks, she manages to make light of it. When she gets her period unexpectedly and Harlow starts talking about her sacred period ritual, Juliet asks "Are you going to make me gargle with my period blood?" Juliet is comfortable enough with Harlow to joke around with her about her weirdness, and I really liked that.

It's hard to do this book justice really, because there's so much going on and so many issues, and I haven't seen a lot of this kind of intersectionality in teen books before. I listened to the audio version and the narrator was great! So I definitely recommend listening if you're into that. Whatever the format, I think this is a great choice for anyone who likes teen/new adult fiction (Juliet is college age), feminism, queer and Latinx characters, or just good refreshingly different stories.
Posted by 3goodrats at 3:18 PM