The Psychopath Test: A Journey Through the Madness Industry by Jon Ronson (2012) 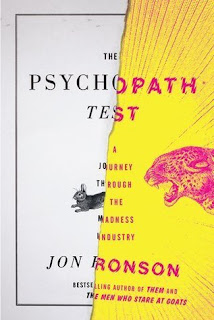 It started with a book. An unusual book from an unknown source with a cryptic message. But not just one - they were mailed to a number of people, mostly neurologists, and one of them contacted Jon Ronson in hopes that he could solve the mystery. He did, but it became part of a much larger mystery about the nature of psychopaths, and their prevalence in society. Ronson got to know Scientologists, a patient in a hospital for the criminally insane who claims he doesn't belong there, a CEO who may or may not be a psychopath, and a guy named Bob Hare who invented the test that will tell you if someone is a psychopath.

It's an entertaining story that feels more like multiple stories loosely woven together. Very loosely. You might say tenuously. Ronson speculates a lot about people who may possibly be psychopaths and weaves them into the story, which is not a complaint. Just don't go into this expecting a clear cut logical narrative.

I've not read anything from Ronson before, but he's clearly a fairly neurotic anxietal kind of guy, but not in a bad way, in a way that is relatable and a little humorous. I especially appreciate that after learning about the psychopath test and the factors to consider when evaluating someone he kept applying them to himself. Like if he did something impulsive or expressed a slight lack of empathy he would immediately worry that perhaps he was a psychopath, which would cause him great anxiety. It should be noted that one expert he talked with said that if you recognize some of the traits within yourself and are becoming worried that you might be a psychopath, you're not. Which was a great comfort.

A couple of stories stood out to me as particularly fascinating. One was about a woman named Rachel North who survived the 2005 London subway bombing, wrote about it online, and then was subject to harassment by a group of conspiracy theorists who claimed the entire thing was a hoax. I'm honestly not sure what this had to do with psychopathy now that I think of it, but it was an interesting and scary story. Another one had to do with experimental treatments in a psychiatric program where the patients were all high on LSD and doing very long intense group therapy sessions naked. I don't know why anyone thought this was a good idea, but at the time it apparently seemed legit to whoever has to approve such things.

One of the more interesting themes in the book was the nature of mental illness itself. The Scientologists really enjoyed making fun of some of the conditions added to the DSM, like Internet Addiction and Intermittent Explosive Disorder and Relational Disorder. They clearly don't understand that sometimes things cross a line and make it hard to be a functional human, but it does beg the question: where is that line? When is something part of human nature and when is it a disorder that should be treated? When is a person eccentric and when are they mentally ill, and is the line between the two just an arbitrary distinction based on one person's decision?

I found this to be an entertaining read, but I didn't think it delved very deeply into the issues. Rather it sort of meandered around in a way that was still fairly enjoyable. It didn't blow my mind, but I liked it well enough and it gave me some things to think about.
Posted by 3goodrats at 11:55 AM