My Year of Rest and Relaxation

My Year of Rest and Relaxation by Ottessa Moshfegh (2018) 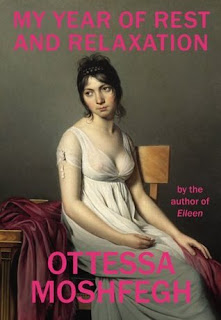 Once again I have read an entire book and, only when sitting down to write about it, realized that the narrator was never named. I keep falling for this - how do I not realize it while I'm reading?

Our narrator is a beautiful, wealthy young woman. Her parents are both dead and her inheritance will sustain her for a year while she essentially hibernates. She has found a total quack of a doctor (who I think could be a whole book herself) to prescribe lots of drugs for insomnia, including one that causes 3-day blackouts. She emerges from her apartment only to visit the corner bodega for coffee and food. She occasionally sees her best friend Reva, who is pretty loyal given how she is treated by her so-called friend who seems completely uninterested in her. Reva's mother is dying and our narrator responds by being annoyed at Reva's need to talk about it. She's also still in contact with Trevor, a guy she had a relationship with and now is half-heartedly stalking by phone. This is her life: live in squalor, take drugs, sleep, don't care about anyone, don't care about herself, sleep some more.

There's not much of a plot here, which is enough to drive some people away. I get it. Sometimes you need a story, or at least a likable protagonist, and this book contains neither. It's one of those books that everyone seems to either love or hate. I'm in the love camp. This person is just so screwed up, but I can kind of understand the motivation to just step away from the world for a while and get a whole lot of rest for a long time. I was a little jealous at times. Except for the part about the drugs. I'm not a fan, especially of something that will cause you spend three days doing things that are kind of out of character and that you don't remember later. She actually went out clubbing during her hibernation while on these drugs.

I love a good character study, especially when it's about someone on a downward spiral (see also: The Cry of the Sloth, etc.) But Moshfegh's writing style deserves a lot of the credit for my enjoyment of this book too. When not a lot is happening, you need to write about it in a way that will keep the reader's interest and she did that for me. It's hard to say exactly what about it is so good, but I think the dialogue and commentary is just rather colorful and dramatic somehow, and the narrator just has so many unexpected observations and dreams and strange thoughts that she recounts. (I mean here is a person who can't drum up any feelings towards anyone or interest in much of anything, but absolutely loves any movie starring Whoopi Goldberg.) It also doesn't hurt that all the characters are pretty bizarre and screwed up, not just our narrator.

This book is not for everyone. But it was definitely for me.
Posted by 3goodrats at 10:04 AM