The Russian Dreambook of Colour and Flight

The Russian Dreambook of Colour and Flight by Gina Ochsner (2009) 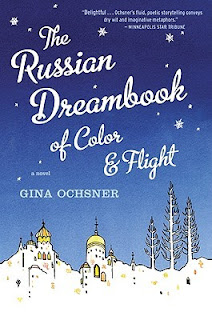 The characters in this story all live in an apartment building that has been without running water for months, and must rely on an outside latrine in their courtyard. Also in the courtyard is a heap of garbage, several clawfoot tubs, and a band of homeless children. The first person we meet is Olga, who works as a translator for the newspaper the Red Star, and must rewrite news in a way that is palatable and less upsetting than the reality. Her son Yuri works at a museum full of not original art, but replicas made by the employees out of everything from tin foil to chewing gum. His girlfriend Zoya also works there and lives in their apartment complex with him and his mother. Tanya works in the coat check at the museum, lives in the same apartment building with her grandmother, and has been in love with Yuri for a long time. She aspires to work for the airline Aeroflot, but needs to lose weight first to fit with their requirements. The final main character is Azade, the old woman who sits outside of the latrine and charges everyone for using it. Her husband, Mircha, begins the story by jumping off the roof of the building to his death.

He's not gone though. As his body remains under a pile of snow in the courtyard, he also visits the characters throughout the story giving them advice. Like Yuri, whose girlfriend Zoya is desperate to get pregnant, while Azade's son Vitek is trying to convince him to join up and go to war. But Yuri already went to war and hasn't recovered. He is plagued by the memories, by the ticking he hears in his head, by Zoya who he's really not happy with. But he's not taking charge of his life. His mother Olga is also struggling. She's becoming increasingly upset at the lies she is force to write for the newspaper, but she can't tell the truth if she wants to keep her job. Only her friendship with her coworker Arkady makes her job tolerable. Tanya is also experiencing pressure at her job, when her boss asks her to fill out a grant application, and the result is a visit from some Americans who want to see the museum and are expected to stay with Tanya while they're visiting. In the apartment building with no running water and homeless children terrorizing everyone out in the courtyard.

Nothing is going well for anyone in this book, but it's the life they're used to and they just do the best they can what with they've got. It sounds like it could be depressing, but it's not. It's written in that uniquely Russian (I think?) absurdist style that is funny but darkly so. Some parts - including dialogue - read like rather poetic riddles. It's a very specific kind of story and writing that I imagine is not for everyone, but I like it.

The story doesn't have a lot of forward momentum and it's rather thin on plot, so although I liked it, I didn't exactly fly through it. Unfortunately, I also wasn't really in the mood for it when I started, but once I got going I was glad to be reading it. If you like absurdity and Russia and quirky characters, you might want to give it a try.
Posted by 3goodrats at 9:12 PM