An Everlasting Meal: Cooking with Economy and Grace by Tamar Adler (2011) 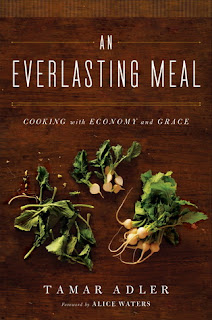 So I don't remember where or how I heard about this book, but I somehow got the impression that it would teach me how to cook without a recipe. In reality, it was more like a series of essays in which Tamar Adler talks about everything she cooks and eats, telling us how and why she does what she does. It's very much about intuitive cooking, but doesn't really tell you how to gain that skill yourself (possibly because you either have it or don't?) She does give instructions, and even recipes, but it's pretty loosey-goosey. I came away with the feeling that any cooking instructions at all are just suggestions and you can always take them with a grain of salt and change them to suit your needs and tastes, which is pretty reassuring.

It also emphasizes using up every single part of every food. She's constantly talking about throwing ends of onions in a bowl for stock or pouring fat into a jar for cooking later. I imagine this is incredibly useful if you're very frugal yet very organized (so as to keep track of all these odds and ends) or if you're living through some sort of apocalyptic event.

The whole experience was rather aspirational for me, as I did like to imagine that I'm the kind of person who can just throw bits of this and that together and have a delicious meal, or who will squirrel away bits of bone and fat and vegetable scraps and then - and this is key - remember that I have them and also where I put them.

In reality, I think maybe it did give me a few ideas about ways to use bits of leftovers; primarily, smashing them up and putting them on toast. There were also a couple of practical ideas I might employ: buying lots of vegetables and just roasting them all at the beginning of the week rather than waiting to cook them later when I magically have good ideas about how to use them; and using leftover parsley by making parsley oil, which she insists makes everything taste better:

"To make dark green, lovely parsley oil, chop the leaves off a bunch of parsley, smash a clove of garlic to a paste with a little salt, and douse both in olive oil. Combine herb and oil here with volition. It is not damp herb you want, but a lusty, deep, spoonable sauce that assures sliced tomatoes get eaten deliberately, with eager hands spooning garlicky green sauce onto each."

Sounds tempting, doesn't it? I also liked her idea that you can put pretty much any leftovers onto some rice, top it with a fried egg, and call it a rice bowl.

Early in the book she makes some crazy statements that I'm glad I soldiered past. She says that avocado should never be put in an omelet because it tastes "flabby," which isn't even a thing. Plus as far as I'm concerned, avocado is welcome everywhere. She also insists that frittatas are intended to be made ahead and "cooled for hours or days because they are better that way" and that "No one has ever eaten a frittata hot and not been scolded for it." Obviously a bold lie as I've eaten, and served, many a hot frittata and not once been scolded. They're fine leftover the following days, but not better.

Her small number of controversial statements are tempered by her more welcome opinions, like what a shame it is that we've decided bread is bad for us. She insists that it is not and she's preaching to the choir here because I could not agree more that the recent vilification of bread is a travesty. I also think it's important to mention that she is honest about how long it takes to caramelize onions, which elevates my opinion of any food writer.

The thing about this whole idea of using bits of leftovers together to make new things is that they do have to go together. Sometimes my leftovers are already sauced or spiced in ways that would not be delicious together. It seems like she maybe eats a lot of the same kinds of things: variations on bread, rice, beans, roasted vegetables, drizzled with oil and a grating of parmesan, topped with a fried egg. Adler was also rather inconsistent in that she goes back and forth between "anything goes" and strong statements beginning with "you must" and "you shouldn't." But like with any book of advice, I feel like you should just take what works for you and leave the rest.

Much of the pleasure of this book is in the writing itself, which is often dramatic and grandiose and full of unexpected, and often clever, turns of phrase. Some readers find it a bit twee, and I suppose it veers in that direction sometimes but I like a surprising metaphor and her descriptions made me want to eat almost everything she was telling me about. It was a very sensory experience. When I finished it was very jarring to see on the back cover flap that she lives in Brooklyn, as I had pictured her rattling around a big old farmhouse in a slow-paced little town somewhere. I guess it's reassuring to know that one can have this attitude and philosophy towards food even in a city.

When I started this book I was honestly not sold on it and wasn't sure if I'd finish, but ultimately I was captivated by her obvious deep love of food and the lush, almost magical, way she writes about it. I don't know how much, if at all, this book will influence the way I cook and eat, but it's a book I can see myself coming back to in the future.
Posted by 3goodrats at 9:06 AM