I Think You're Wrong (But I'm Listening) 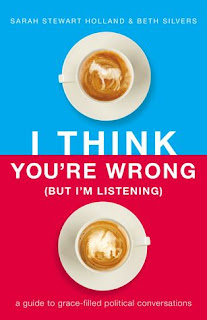 As everyone who has talked to me in the last couple of months knows, I've been listening to a podcast called Pantsuit Politics, hosted by two women from different sides of the aisle. Sarah is a Democrat and Beth is a Republican, and their tagline is "No shouting. No insults. Plenty of nuance." In their new book, they try to teach the rest of us how to put partisanship aside and have difficult political conversations with people with whom we disagree.

They are both women of faith and as such they talk a lot about grace. This is not a religious book, so please don't be deterred if you're the sort of person who is deterred by that. There's an occasional Bible quote, but these women are what I tend to think of as "the good kind" of Christian, which is sort of horrible of me. But what I mean is that they espouse the values I was always taught in church as a child (charity, forgiveness, etc.) rather than the hatred and judgment we all too often see from so-called Christians these days.

Although Beth and Sarah are willing to listen to, and even embrace, differing viewpoints, they have some baselines. For instance, they don't consider racism or homophobia to be acceptable because they feel strongly that all humans are deserving of respect and love so they will not entertain those views or give them airtime. They do not embrace the "all sides" rhetoric or condone news shows that insist on giving equal airtime to all viewpoints when clearly some viewpoints are more valid than others. These are very smart women who value education, ethics, and honesty and strive to rise above partisanship and I think they do it very well.

The first few chapters of the book are collectively called "Start with you" and they introduce us to some foundational principles to make sure we're bringing our best selves to our political conversations. They acknowledge that many of us are discouraged from talking politics, especially with people we disagree with, but they think this is dangerous because it reinforces isolation and echo chambers. They encourage us to "take off your jersey," a reference to how we talk about politics like sports, in which the only important thing is that our team wins. In "Find Your Why" they ask us to look at our values, which is a more productive focus than the nitty-gritty of particular pieces of legislation and allow us to have relatable conversations with other people who want the same basic things even if we disagree about how to get there. "Put Politics in Its Place" is a reminder to keep things in perspective and think about other ways outside of politics that we can have a positive impact.

Part two is "Turn Your Eyes Outward," which is where they give more specific advice about interacting with other humans in political conversations once we've worked on ourselves. They talk about grace, which is basically giving people the benefit of the doubt rather than assuming that everyone is nefarious. They encourage us to be curious, about each other and about issues: ask questions rather than assuming that a person who believes one thing also holds a whole set of beliefs that you think go together, and learn as much as you can about issues from nonpartisan sources. They talk about embracing paradoxes and the value of being uncomfortable, how to exit the echo chamber, and of course, offer advice on keeping it nuanced. They acknowledge the complexity of issues and relationships and warn against oversimplification and taking sides.

I could honestly talk about this book for ages. It makes me wish my book group was still together so we could talk about this because I think there's a lot here that we would all do better to think about and consider. I know my friends and I are just as guilty of a lot of these things as anyone, and we could all do better to make fewer assumptions about each other and stop acting like we're all going to die if such-and-such person gets elected or some horrid piece of legislation enacted. Yes, there are bad things and there always have been, but there are more productive ways to deal with them than to become more and more partisan and divisive. That is what's been happening and it's not benefiting anyone right now.

I found so many passages I wanted to save and quote, but if I try to do that here I'll basically be re-writing the book. But I put a bunch of them into a Google doc that you can access here if you'd like to read some samples. I do encourage you to read this whole book though. I promise you it's short and easy to read. I struggle with nonfiction - especially nonfiction that's not telling a story - and I had no problem with this one. It was enjoyable and gave me a lot to think about. I'm adding it to my very short list of books that I think everyone should read.
Posted by 3goodrats at 2:18 PM

I started listening to the podcast after you mentioned it in a post! I'm excited to see if my library has the book.

I hope you like it as much as I do!