April Wrap-Up and Plans for May 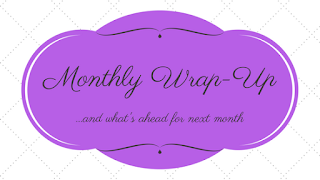 
I finished 8 books this month, which is pretty typical. It was a good reading month! I read three very different nonfiction books that were all quite good: I Think You're Wrong (But I'm Listening), which is all about having productive political conversations with people who may have different perspectives; Mayflower, the history of the first Europeans who came to New England and their relationship with the native people; and An Everlasting Meal, which is about food and cooking.

Both audiobooks I listened to were great: The Upside of Unrequited and American Street. Really, everything I read and listened to this month was quite good!

I managed to get to one book from my TBR Pile Challenge at the very end of the month, Paradox Bound by Peter Clines, which I'll be posting about soon.

I watched the first season of The Great British Baking Show without Mary Berry or Mel and Sue. In many ways it wasn't the same, but the bakers were great and the new people can't help that they aren't the old people. Plus, baking!

I'm also re-watching Veronica Mars in anticipation of the reboot that's coming in July. I've watched season 1 and am now on season 2. It's so funny to watch a show I've seen before that I remember bits and pieces of, but there were a lot of things I had totally forgotten. Such a great show!

Earlier this month I made a visit to an actual movie theater to see Jordan Peele's Us. I was afraid it would be super creepy and freak me out, but although it had some creepy moments I found it more thought-provoking than scary. It's the sort of movie that as soon as I finished it I immediately wanted to go back and watch it again knowing what I know now.

I think the only new things I tried were Chile and Bell Pepper Quesadillas from Moosewood Cooks at Home and Sloppy Joes from the Pioneer Woman both of which were pretty easy and tasty. I also finally tried a no-knead bread, or I guess it's technically Almost No-Knead Bread, as the recipe in Bread Illustrated is called, since there's like a minute of kneading. It came out quite well! Otherwise I cooked and baked things I've made before.

Work lunches are always a struggle and I've made grain bowls a couple of weeks recently. I used this recipe once, I think back in March, but then another week I decided to just make up my own since it's all components. I roasted some broccolini and carrots, cooked arborio rice and mixed it with pesto, added sauerkraut leftover from the previous bowls, and topped it all with chopped radishes and hard-boiled eggs. It was pretty good. I like the idea of just cooking components and throwing them all together. I look at a lot of grain bowl recipes but usually there are things I like and don't like about them, so I may start just mixing and matching components and sauces and whatnot. One thing that frustrates me about these recipes is that they often top them with avocado, even the ones suggested to take for lunches on the go. It's like they don't realize that avocados will brown. I love avocados and would love to have them in my lunch, but it's not realistic. Anyhow, we're also getting into main dish grain/pasta salad season so I look forward to finding some new options to eat outside in the park during my lunch while reading. I can't wait for those days!

I also got together with a friend to do some cooking and we made a stir-fry. I learned from this experience that the best way to stir-fry is to cook each ingredient separately and then combine them at the end. In the past, I've followed recipes that try to time it so that you put in the longest-cooking things first and then add the others gradually so that they'll all be done the right amount at the end, but it never quite works out. I think that's because you can't necessarily anticipate how long something will take and it's very easy to overcook ingredients. So now I may try stir-frying again because I really like eating stir-fries and now I feel like I have a handle on how to do a better job of it.

I did finish physical therapy, not because my shoulder is 100% healed but because I reached the point where my insurance cut me off. Yay, America. I'm glad it's over though. They were lovely at the physical therapy place, but it was hard. It was a lot of exercise, and also I had to use part of my lunch break twice a week, so I'm glad to have that off my schedule. I have some exercises to do at home, though I haven't been great about actually doing them.

With physical therapy over, I've begin doing other exercise again. I've gone to Zumba a few times and I've been running once or twice a week, though it's been hard with all the rain we've been having. (I don't run in the rain. Or snow. Or ice.) But when I've run it's been for 2 miles or a little more, which is pleasantly surprising.

I also finally bit the bullet and ordered a new laptop, since mine has had multiple horizontal lines running across the screen for a couple of months now since I dropped it. I couldn't bear to pony up for another Macbook so I ordered a cheap laptop that was recommended in an article. Honestly I didn't do a ton of research because computers are boring, but I also didn't spend a ton so it doesn't feel very risky.

I've made pretty good progress on the sweater I began knitting. I actually screwed up near the very beginning and didn't realize it until a few inches later, but I ripped back and re-knit it correctly because I knew it would drive me nuts if I left it, even though it probably wouldn't be noticeable to most people.

Now that I'm out of the bleak winter I feel like I need to reassess and refocus on goals for this year. Right now I don't remember what any of those goals even were.

I'm attending the Massachusetts Library Association conference later this month, which I'm looking forward to. I also have a new person starting at work who I have to train and get up to speed, so I think it's going to be a busy month!

I booked a camping trip at the very end of the month that I'm excited about because we're actually getting a camp site that requires a half mile hike to get to, which means we won't have lots of people and dogs and radios on top of us. I'm just hoping the weather holds! It feels like we got a year's worth of rain in April so hopefully we'll have nice weather for May.

How was your April?