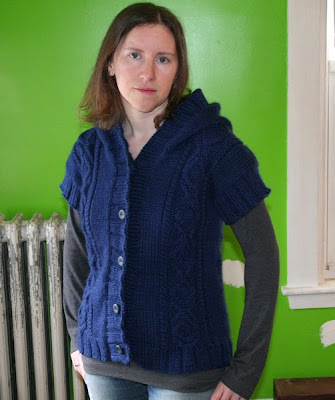 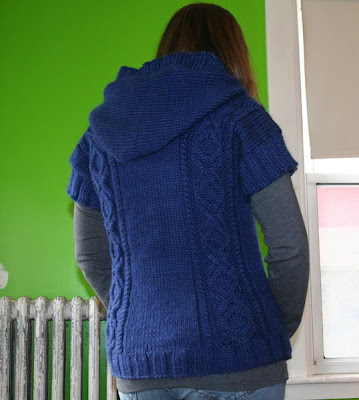 This shouldn't have taken me four months to make. It's made of bulky yarn and has no sleeves. I started it in early September thinking that it would be perfect in November or so, when it's gotten colder but isn't freezing yet. Maybe I'll be wearing it in March.

Despite my feelings that I should stick with skinnier yarn for sweaters, I couldn't resist this cute pattern when I saw it. I've never been sure about the color choice, but definitely wanted something sort of neutral-ish. It was a pretty easy knit, I just kept setting it aside to work on other things.

Many who have made this have been unhappy with the bizarrely ginormous hood, so I skipped a lot of the decreases which doesn't seem to have helped much. I've also found that the hood has more problems than just it's vast size - it is oddly shaped so not only can I not really wear it up, it doesn't sit right on my shoulders either.

But the fit is great. Most importantly, it is long enough!

I posted a preview of the buttons, but forgot to discuss my conundrum with attaching them. Pattern instructions will sometimes say to sew them on with some of the yarn, but I don't think I've ever had buttons with large enough buttonholes for that. In the past, I have unplied yarn to sew the buttons on, but doing that reduces the strength of the yarn and now that sweater is in a pile waiting for me to find matching embroidery thread with which to reattach the buttons. Finding matching thread can be difficult though and while I prefer embroidery thread for its thickness, in this case I couldn't find any in a close enough color so I ended up using regular sewing thread I had at home. What do you use to sew on buttons?

The buttons were a bit of a challenge themselves. The day I went to Windsor Button to buy them, it was extremely crowded there and the buttons aren't self-serve. I usually end up lining up a whole bunch of different buttons on the sweater in question before making a decision, but this time the man helping me got busy with a long line of customers and I decided that the first ones I tried really were the best. They are a little darker than the yarn, but shot through with a bit of a lighter blue so I think it works quite well.

For the most part, I'm quite happy with how this sweater turned out. It's not super fashionable and I don't know if I'll wear it to work, but it's very comfy so I'm sure I'll get some use out of it. All in all, a successful project!
Posted by 3goodrats at 6:40 PM

You look seriously bad ass in that first picture!

The sweater is gorgeous by the way :)

Hey Linda,
I am almost done with mine, and I did not make the hood at all (lack of yarn!). I love your color so much! I have been pseudo stalking you on ravelry waiting for your finished Hoodie - and so glad to see the final project, it came out gorgeous.