A romance and a graphic novel

It's more difficult than I thought to review every book I read. I finished both of these a couple of weeks ago and just realized I hadn't posted the reviews. Whoopsie! 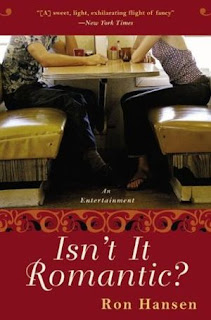 Isn't It Romantic? by Ron Hansen

A young French couple on a bus tour get stranded in Nebraska at a turning point in their relationship. They are welcomed into the homes of some locals and hilarity ensues. Nobody seemed to be clear on which person they should be paired up with, and the language barrier causes various humorous misunderstandings.

This book wasn’t what I expected, which was a quiet little romance. Instead it was farcical, a comedy of errors. I kept picturing it as a movie, certain scenes in particular. But it was an enjoyable story with delightfully interesting charactors. A short, quick read. 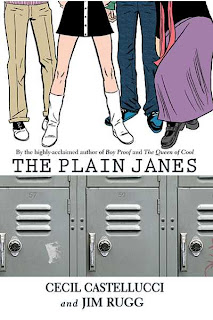 The Plain Janes by Cecil Castellucci and Jim Rugg

I recently stumbled upon this graphic novel while shelving in the library. It’s about a girl who survives a bombing in Metro City only to have her parents panic and move the family to the suburbs. She is very upset at having to leave, especially because she has been visiting a comatose stranger injured in the bombing. She takes his art notebook and writes him letters from her new town. At her new school she struggles to fit in and, along with some other misfits, starts an underground art group. Under cover of night, they stage “art attacks” like putting soap bubbles in the town fountain and knitting hats and scarves for fire hydrants. Not everyone in town gets their message though, and they are targeted as vandals.

Although the theme of not fitting in is so common – especially in graphic novels – I loved the story about her newfound friends doing something that was so outrageous and fun and secretive. And I loved that she got the idea from a comatose guy, or his notebook anyway, and that their (mostly one-sided) relationship was so important to Jane throughout the book. There were some great parent/teen interactions – her parents were so protective that Jane worried she would become as scared as they were and never experience anything in the world. Just for good measure, there were also some awkward romantic situations thrown in. All in all, a fun enjoyable book!
Posted by 3goodrats at 7:15 PM