Memoirs of a Teenage Amnesiac : a review 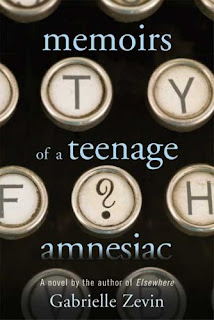 After taking a tumble down her school steps, Naomi wakes up with no memory of the last four years of her life. She doesn’t remember her parents’ divorce, her new little sister, her best friend Will, or why she could possibly be dating a tennis player named Ace. Rather than continuing the struggle to try and pick up where she left off, Naomi decides to just go forward and start fresh.

Predictably, she eventually regains her memory, and this is was the one small part of the plot that I thought was a little unrealistic. At this point it would make sense for her to have a revelation about why she liked Ace, didn’t get along with her mother, didn’t like her father’s girlfriend, etc – things that hadn’t made sense before should have fallen into place and there should have been an inner conflict between the person she was before her accident and the person she became afterwards. But this didn’t happen and although she remember a lot of facts, those larger issues weren’t addressed, at least not right away.

Despite this one small flaw, I enjoyed this book a greal deal. I liked the main character a lot, as well as her friend Will (in fact, I wanted more about him, like maybe another whole book.) Tying in her high school photography project with the story of her adoption added another interesting layer. There were some great themes in the novel about memory, the complexity of family relationships, giving yourself and others a second chance, and how your experiences shape you as a person. It’s a good jumping-off point for discussion, but also just a very enjoyable book to read. Recommended!
Posted by 3goodrats at 7:44 AM