The Physick Book of Deliverance Dane : a review 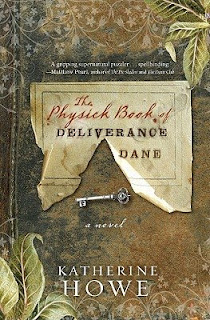 Graduate student Connie Goodwin has passed her oral qualifying exam and now must begin her dissertation, while simultaneously fixing up her grandmother’s house which needs to be sold after sitting in disrepair for 20 years. When she finds a mysterious key in a bible with a note inside it saying only “Deliverance Dane” her graduate research and her personal life begin to converge in a way she could not have foreseen.

I’ll admit I had my doubts early in the book. There was a chapter or two that ended with Connie seeing something and gasping, which was a bit too Dan Brown for me. There was also a scene in which she and a friend were in a car headed to her grandmother’s house and her friend asks “Who’s house are we going to? And why?,” the sort of scene which always leads me to wonder what could have possibly brought them to this spot. “Hi Liz, please pack your bags and get in my car. We are going to a house. That is all I will tell you.” And then I proceed to imagine other ways in which the author could have written that scene which would have conveyed the needed information in a more realistic way.

But I digress. And those were just minor blips in a book that overall was rather fascinating. I’m kind of a sucker for colonial America, witchcraft, and libraries so really it would be more shocking if I didn’t like this book. I loved the thrill of the chase, the mystery that unraveled in musty archives and an old house filled with secrets. Interspersed throughout the book were chapters that took place in the 1600s leading up to the Salem witch trials, and they painted a very different – and more fleshed out – picture of daily life in this period than I have read before. The author had a rather different take on the trials, and witchcraft, than the usual and it really made the book much more interesting. She was able to add a bit of supernatural to the story without making it a total fantasy, if that makes sense.

Very fun book, and I expect that someday we’ll see the movie, too.
Posted by 3goodrats at 2:22 PM