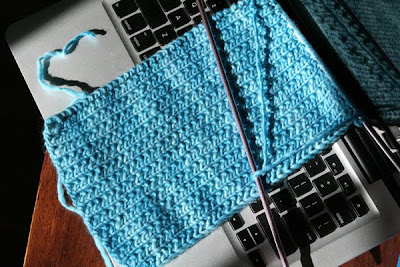 I may have mentioned before how much I dislike knitting scarves. But the fact cannot be escaped - I really need a nice snuggly warm scarf. A few months ago I bought a couple of skeins of Malabrigo worsted, suspecting that it would never actually become a scarf, but I surprised myself a few days ago by casting on for the Scrunchable Scarf. The pic on the site makes it look unappealing but there are some nice shots on Ravelry.

Originally I wanted bulkier yarn for nice big squishy scarf, but I also was leaning towards Malabrigo and none of the bulky colors jumped out at me. This pattern knits up nice and snuggly and squishy, so I think it will be great. And the color is amazing. This picture doesn't quite capture the subtle shades, but maybe I'll get some better pics later.

The pattern is super easy and it makes for great tv/movie knitting. I haven't had a project like that for a while.

Progress shots of scarves are very boring, so I won't show this to you again until it's done!
Posted by 3goodrats at 6:44 PM