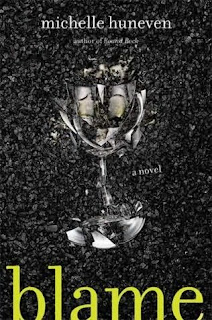 A young college professor with a drinking problem wakes up in jail one morning to find out that she hit and killed two Jehovah’s Witnesses in her driveway the night before. Patsy stops drinking in prison, and after she gets out she begins to rebuild her life. The guilt she feels about the accident contributes to many choices that she makes as she begins friendships and navigates romantic relationships.

The story began in an interesting spot. It picked up at the end of Patsy’s boozy years, and then extended beyond her time in prison – when she got out and was getting settled, it started to feel like the story wasn’t going anywhere. But I knew from the jacket flap that additional details would emerge about her accident. When all is said and done, it makes sense that it started and stopped where it did, but while reading it, it felt like the plot meandered.

I can’t decide how much I like Patsy. I actually have trouble reconciling Drunk Patsy with Professor Patsy. When we first meet her, in the first chapter of the book, she doesn’t come across as anything other than a party animal/train wreck who isn’t very bright and it’s hard to believe that she has an academic career. It’s also hard to believe it’s the same person that we meet later, sober. Anyhow, she is a bit of a martyr in parts of the book, denying herself certain pleasures because she wants to be responsible. I’m not saying she should have cheated on her husband necessarily, but…well. I question her choices. I think she made a rather calm and bland life for herself.

Guilt and responsibility are, of course, big themes in this book and not just in regards to the accident. There is lots of food for thought and discussion here, and I think this would be a great book group choice.
Posted by 3goodrats at 12:49 PM