Secrets of Eden : a review 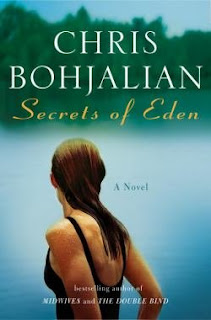 Chris Bohjalian's new novel is about a couple, George and Alice Hayward, who die in a murder-suicide. George was known to have been abusive to Alice and they had been separated for a while. One night a few months after he came back, while their teenage daughter Katie was out with a friend, George apparently strangled Alice and then shot himself in the head.

But it becomes more complicated. When Alice Hayward’s diary is found, it turns out that she was having an affair. Further, evidence from the scene of the crime raises questions about how George died. What at first seem so cut and dried is suddenly rather unclear.

The story was told through four different narrators: the Reverend Stephen Drew, who had baptized Alice on the last morning of her life; angel-obsessed author Heather Laurent, whose parents died in a similar way; investigator Catherine Benincasa; and daughter Katie Hayward. This use of different perspectives is what made the story so much more complex – the reader simply doesn’t know what to believe about whom. Of course, I had my favorites. I was rooting for Stephen Drew throughout the book, while I found Heather Laurent more than a little loony and annoying.

I really liked his twist on the domestic violence story. The ending was abrupt but, I think, appropriate. The book wasn’t earth-shattering but it was as compelling as Bohjalian’s stories always are. In this age of rushed deadlines and sloppy editing it’s really nice to have an author you can count on to consistently tell good stories well.
Posted by 3goodrats at 7:52 AM