Little House on the Prairie : a review 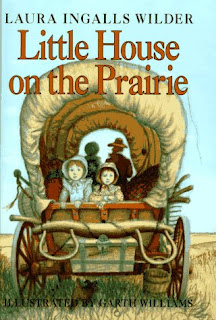 In which the Ingalls family travels across the prairie and takes up residence near Indepdence, Kansas, Pa builds their house by hand, they are terrorized by a panther, Indians come into their house, and the whole family suffers from fever n’ ague and are saved by a black man. As if that weren’t enough, Mary and Laura are gobsmacked to each receive a tin cup AND candy AND a penny for Christmas. This is exciting stuff!

As a kid, I didn’t pay a lot of attention to the Indian/white relations in this book, but it really stood out to me reading it as an adult. The Ingalls and their neighbors had such strong opinions about the Indians, though Pa went against the general feelings of the time and tried to defend them. But nobody thought it was wrong for the white settlers to keep pushing the Indians West. In the end though, it was declared that the Ingalls family and their neighbors had settled in Indian territory, so the family packed up and left.

During the course of this book I started to question Pa a little. He is definitely handy, but sometimes I had to wonder about his choices. An article I read about the family mentioned their frequent moving around, various homestead failures (like this one) and his risk-taking, and implied that Caroline and the girls really put up with a lot. It’s hard to really understand his character and motivations through a children’s book. But I will say that Pa has a whole lot of responsibilities and very little help to carry them out, not to mention having to protect his family from so many dangers. It is really all very daunting.

I wish I didn’t have so much other reading lined up right now. I’m dying to just dive into the next book in the series!
Posted by 3goodrats at 7:38 AM