(Spoilers after the break, with plenty of warning.) 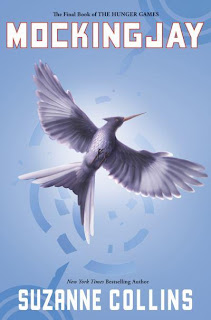 Hot off the press, Suzanne Collins’ long-awaited finale to the Hunger Games series is here! I’ve been antsy with anticipation since around May, but it reached a fever pitch once I started reading all of the buildup on my new favorite blog, Forever Young Adult. (Which in addition to awesome book reviews has drinking games based on such classics as Flowers in the Attic and the Sweet Valley High series. How awesome is that?)

Mockingjay opens in the aftermath of district 12’s decimation by the Capitol, which is now holding Peeta prisoner. Katniss is recovering in district 13, previously thought to have been destroyed long ago, where she struggles to get her bearings after the trauma of events from the last book. The rebels are mobilizing to fight against the Capitol and its oppressive powers which forced everyone in Panem to participate in the Hunger Games. Katniss is the Mockingjay, the face of the revolution. Her one goal: to kill President Snow herself.

As you might expect there is lots of action, romantic indecision (Gale or Peeta?), betrayals and – this is a war, after all – death, lots of death and sadness. There are some shocking developments in the story that will keep you riveted to the page until the very end.

I wish I had re-read the first two books just before this one, because it had been a year since I read Catching Fire and I started off a bit disoriented. I don’t completely understand all of the author’s decisions, and I found the epilogue a bit weak, but in general I really liked it a lot. I love the characters, I love the dystopian aspects, I love that nothing in their world is black and white, no matter how hard the players try to portray it that way. A satisfying conclusion, but a conclusion nonetheless. What a fantastic series – I am sad that it’s over!

Spoilers below!
.
.
.
.
.
.
I am warning you, don’t peek if you haven’t read the book!
.
.
.
.
.
.
You will regret it, I swear.
.
.
.
.
.
.
Ok, ready to discuss the surprises?
.
.
.
.
.
.
Prim! Wtf? This all started because Katniss volunteered to take her sister’s place in the Hunger Games to save her life. And now she is killed off anyway! It has all been for naught! Ok, the rebels have won and President Snow is dead, and those ARE larger than one person’s life, but it still seems unfair. Also? It is Gale’s fault! I am glad that neither Gale nor Peeta were killed off, thus making Katniss’s decision for her, but I’m not so sure that I buy Gale’s hard-heartedness about Prim’s death. He always came across as being more caring about her family than that, though one of my co-workers says she could see Gale changing and becoming more devoted to the cause and wasn’t especially surprised. Maybe I was just stubbornly insisting on seeing him the way he used to be. I was absolutely not expecting Katniss to shoot President Coin, so that caught me completely off guard. I’m glad she did it, though.

Let’s talk about the epilogue. I am not sad that Katniss ended up with Peeta, as I could see her going either way in terms of her love interest (at least until Gale’s betrayal), but this epilogue was way too Harry Potter. And for the record, I hated the Harry Potter epilogue. Jumping forward 20 years and showing how normal everyone’s lives are is anti-climactic and boring, possibly even soul-crushing. I absolutely understand why Katniss would ultimately want to have a quiet life with Peeta and their children because although the events of the books were exciting and exhilarating, I don’t think it’s how anyone wants to live their lives. Katniss and Peeta are living the life they fought for – one in which they are safe, have enough to eat, and don’t have to worry about their children being killed off by the government.

BUT! Katniss didn’t actually want to have kids - Peeta had to convince her! And it took years! And why did Katniss only refer to the kids as “the boy” and “the girl” and not by name? This implies a distance to her own children that I find unsettling, and makes me question how satisfied she actually is with the life for which she fought so hard. It all made me sad and confused, just in the space of 2 pages.

Then again, maybe the beauty is that just as in real life, nothing in this series is black and white and there is no such thing as a happy ending.

Have you read it? What did you think?
Posted by 3goodrats at 4:13 PM

I actually thought of the Lord of the Rings ending more than the Harry Potter epilogue. Sam Gamgee comes home to the Shire and says, "Well, I'm back." Katniss essentially does the same. She is not a completely good person, and she has not created a completely good world, but it is enough.

I haven't read Lord of the Rings or seen all the movies, but that sounds just as disappointing!