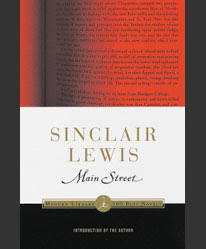 Young and idealistic, Carol Milford graduates from college and after working as a librarian for a while in St. Paul meets and marries Dr. Will Kennicott. They move to his hometown of Gopher Prairie, a small town that Carol is determined to remake into a cultural mecca. But the townspeople don’t see why they should change and after a few false starts, Carol gives up her efforts and subsides into a stifling and unhappy existence. The judgemental, moralistic, and gossipy nature of Gopher Prairie are oppressive to Carol, and she has many doubts about her marriage as well. Occasionally someone interesting will come to town and Carol will start up a friendship, but usually they are driven away by some overblown scandal. At a few different points it looked like she might escape to a better life, but each time I was disappointed when she remained in – or returned to – Gopher Prairie and her marriage.

Although I don’t think this book needed to be quite as long, I did enjoy it. I grew up in a small town where everyone knew everyone else’s business and in a way I could relate to Carol’s predicament. My solution, of course, is not to live in such a town, but 100 years ago women didn’t necessarily feel like they had the same choice. I sympathized with her in terms of the townspeople being so judgemental, but I also thought she was a bit hard on them. She wanted to remake the town into St. Paul but not only is that not possible, I can understand why the townspeople liked their town the way it was. Perhaps it was a bit dingy and unexciting, but it’s their hometown and who is this outsider to say it isn’t good enough?

I found a lot of humorous passages in this book and actually dog-eared quite a few pages (a terrible habit I have picked up recently). One of my favorite quotes illustrates the dark humor in Carol’s character that I found appealing. During an unbearable dinner party:

“Carol reflected that the carving-knife would make an excellent dagger with which to kill Uncle Whittier. It would slide in easily. The headlines would be terrible.”

Another quote, from local Raymie Wutherspoon, is a good example of the general way of thinking in Gopher Prairie:

“One trouble with books is that they’re not so thoroughly safeguarded by intelligent censors as the movies are, and when you drop into the library and take out a book you never know what you’re wasting your time on.”

In summary, I enjoyed visiting Gopher Prairie but I’m quite certain I wouldn’t want to live there.
Posted by 3goodrats at 11:02 AM