U.S. History for Dummies : a review 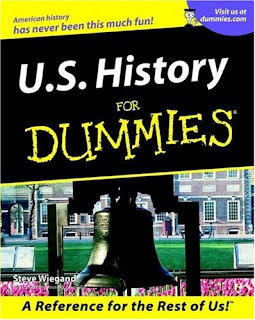 This readable and humorous volume is a great introduction and jumping-off point for learning about important events and themes in our nation’s history. At 370 pages it isn’t comprehensive, but for someone with a short attention span it’s perfect. Like other books in the “For Dummies” series the chapters are short, the tone is conversational and witty, and the text is interspersed with sidebars that break up the information into smaller, more manageable chunks. Some of the more interesting sidebars were “American Faces” which provide brief biographical overviews of important people, “Sidetrips” describing interesting information that is tangential to the main ideas of the chapter, and “In their words” which contain quotes from historic speeches, letters, or other documents.

One of the highlights for me were the early chapters on colonial America. My knowledge of early history starts with the pilgrims arriving at Plymouth Rock (which isn’t even accurate) and then skips directly to the Revolutionary War. Lots of stuff actually happened in between and it was fun to learn about. I also enjoyed many of the sidebars, such as the publication of a hoax story in the Sun that life existed on the moon, and the kidnapping of the Lindbergh baby. Reading only about policymaking and military gains is not only dull, but leaves out a lot that actually influenced how people lived. The sidebars about popular culture add more depth and remind us how much was actually going on at the time being described.

I do wish the book had included suggestions for further reading, but that is a minor quibble. As with any book that tries to cover so much ground, it’s important to keep in mind that it’s telling only part of the story. I felt that the author tried to be even-handed and unbiased, making a point to include different perspectives. Of course, many of the topics are so complex that this is impossible so I’m only using this as an introduction, and I think it was indeed a good place to start.
Posted by 3goodrats at 1:13 PM