It’s not much of a plan really, more of a progress report through which I’m hoping to shame myself into action. With the Tweed Pullover finished, I return to my three languishing projects. 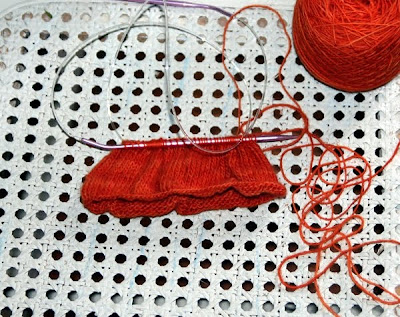 I have knit nary a stitch since this post, though I did move the project to new needles with a smoother join. (So much for my assertion that once I did so, the project would practically knit itself.) My fear now is that it’s been so long I will have to rip out and restart the project because of gauge changes and the fact that I don't know where I left off in the pattern.

Next is the Bramble Stitch Shawl, which I actually have done some work on in recent months, but it is still embarrassingly slow going. 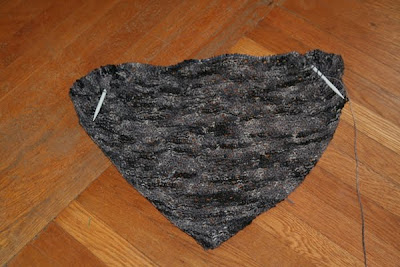 This is also the least photogenic of the projects and I look forward to the day when it is not only completed, but blocked into wintery glory.

Most successful of my works in progress are the Glynis Socks. I’ve been burning through these and have a sock and a half! I think I can finish this sock within the week if I really try. 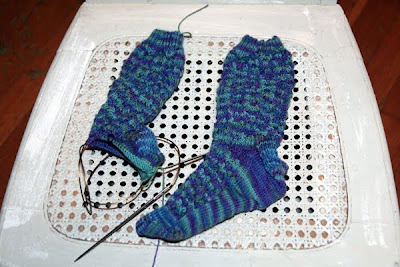 The plan: finish the Glynis Socks, and make substantial progress on the other two projects before rushing out and starting anything new. Beyond that, I have little planned for knitting this year. My only real knitting goal is to make one sweater that is practical and fits me well and that I will actually wear. An upcoming post will discuss this in depth, so stay tuned!
Posted by 3goodrats at 7:39 PM

I saw a question posted by you about a sweater in the yarn girls guide to simple knits. It's a cute chunky striped v-neck that used a noro brand yarn. I'm wondering if you ever found a substitute? I'm wanting to move on from my usual sock knitting and knit something that actually gets seen. (My husband dosn't like me wearing my wool socks with shorts :P ) Any way, I'm in need of advice with this sweater, so anything you could offer would be great! ~Courtney

I never did make that sweater. Have you checked Ravelry.com? I bet someone there has made it and has suggestions!