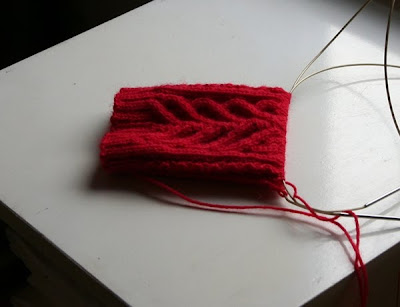 Or of hearts anyway. Valentine's Day is coming up, you know!

This pattern was published in the Holiday Gifts 2007 issue of IK. I bought yarn a few months later and then procrastinated for a couple of years. I thought I was putting it off because the socks are knit toe up, but as it turns out they aren't. I don't know what I was thinking.

So far these are fun to knit, but they involve charts so I may or may not take them on my upcoming jaunt to NY. I've taken them to knitting groups a couple of times though and have managed not to make any mistakes, so I'm happy about that.

I'll try to get some better shots of the cable details to share soon.
Posted by 3goodrats at 9:29 PM