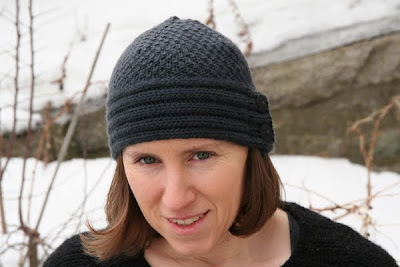 Pattern: Brattleboro Hat from Interweave Knits Fall 2010 (and the book New England Knits) by Melissa LaBarre
Yarn : Malabrigo Worsted in Blue Graphite
Needles : 8 for the band, 7 for the main part of the hat 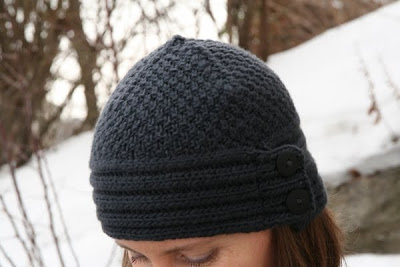 This was a quick fun project. I needed a hat that didn’t clash with the blue scarf that I wear all the time and after I saw The Cable Girl’s Brattleboro I wanted one too.

I knit the band but when I washed and blocked it, it grew a lot! I just ripped back an inch or so until it was the right size to fit around my head. But I had doubts about gauge and wanted to err on the side of smallness, so I went down a needle size when I started on the main part of the hat. After I bound off it sat around for a few days while I put off the finishing. Yesterday I already had plans to go yarn shopping so in the morning I quickly knit the little button flap and then picked out buttons at Windsor Button.

Hats that aren’t ribbed tend to stretch out with wear, so I’m glad this came out a little tight. I think it’s super cute. How I wish I had bought an extra skein of the yarn for matching mittens!
Posted by 3goodrats at 7:45 PM

It looks awesome on you!