Playing With Matches : a review

Playing With Matches by Brian Katcher (2008) 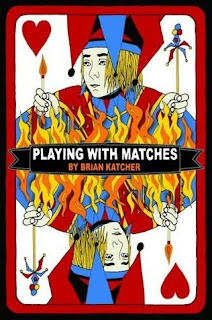 Leon isn’t the most attractive kid at his high school, but he’s also not the worst looking. That distinction goes to Melody Kennon, who was seriously burned as a child and is now shunned by the other students. Her face is covered in scars, she has no ears, and no hair. Once the kids outgrew playground taunting, Melody was just left completely alone. But when she is suddenly Leon’s new locker neighbor, he casually makes a joke to break the ice and soon realizes he has a lot in common with Melody. He invites her to sit at his table in the cafeteria and she starts hanging out with his friends. Finally, he admits his feelings for her are stronger than friendship and they begin dating. Which is right around the time that Amy, who Leon has lusted after forever, suddenly notices that he exists. Now he’s in a predicament and like many of us at his age, he does all the wrong things.

The story arc is similar to Almost Perfect. The main character has a relationship with someone who is a risk to be with, he screws up, he tries again. This was Katcher’s first novel and at times it does feel a little rough around the edges, but that in no way lessened my enjoyment of it. Aside from being a great – and unusual – story, it had the added benefit of a main character with a healthy, yet dorky, sense of humor.

“What has two legs and bleeds profusely?

Leon was a wonderfully mixed-up, misguided character who it is easy to identify and sympathize with. There was a period during which he would sometimes feel incredibly attracted to Melody, and at other times would feel rather put off by her. He was understandably confused by these on-again off-again feelings. I’ve had the exact same thing happen, yet I think it’s the first time I’ve ever read such a spot-on portrayal of this in a book.

Katcher is skilled at accurately representing how teenagers cave to social pressures, and the myriad ways in which they manage to screw up their lives and make everyone around them angry. His books are fantastically readable, and I just can't get enough of them. Seriously - he only has two! Please, Brian Katcher, write some more books!
Posted by 3goodrats at 9:52 PM