Story of a Girl : a review 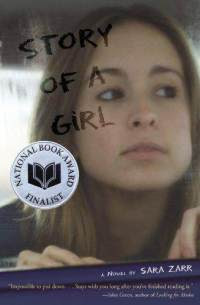 When she was 13, Deanna Lambert made a big mistake – she slept with her brother’s friend, 17-year-old Tommy Webber. Even worse, her dad caught her in action, and then Tommy spread the story around their high school like it was a big joke. Now, three years later, Deanna still suffers from her tarnished reputation. Kids at school either shun her or make her the butt of their jokes, except for her close friends Jason and Lee.

Things at home aren’t much better. Her dad will barely look at her, and her mom just fills the empty spaces with meaningless chatter. Her brother Darren has made mistakes as well, getting his girlfriend Stacy pregnant. Now they and their baby daughter April live in the basement. Darren and Stacy work opposite shifts at Safeway, and Deanna fantasizes that when she gets a job they can all move out of the house together.

Deanna is easy to sympathize with, and her story is realistic and painful. As her friend Lee says early in the book “We’ve all done things we wish we could change.” Deanna wishes everyone could be as understanding as Lee, but they all seem to have decided who she is based on this one stupid thing she did years ago. Deanna struggles to break free of her past and move on, but before she can convince anyone who she really is, she first needs to convince herself.

Story of a Girl is only 192 pages and is a super quick read – I read it in a day. Between the compelling story and characters and the small time investment, there is just no reason not to read this book. Plus, Zarr so deftly handled the sad and frustrating situation of being confined by your reputation. It’s very different from Sweethearts but just as good, proving that Sara Zarr is no one-trick pony.
Posted by 3goodrats at 7:34 AM