In the land of believers : a review

In the Land of Believers: an outsider's extraordinary journey into the heart of the evangelical church by Gina Welch (2009) 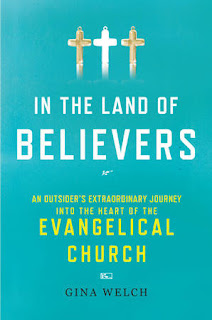 Gina Welch is a secular Jew, raised atheist, who wanted to understand Evangelical Christians beyond the sound bites and generalizations she heard from the media. In 2005 she went undercover and joined Jerry Falwell’s Thomas Road Baptist Church. She was saved, baptised, and even went on a mission trip to Alaska. All told she spent about two years as part of the church before leaving.

Welch talked about the feeling of community and support provide by her fellow church-goers, and how quickly and warmly they welcomed her. She liked the regular self-inquiry and admired how the Evangelicals would strive to live by their beliefs (even if she did not share them). She also spoke about forgiveness and tolerance, even pointing out that despite Falwell’s bigoted talk, many in the church are soft on issues such as gay marriage. Ultimately, she changed through her experience, becoming less judmental of others and adopting a more positive attitude.

The writing was a bit uneven. The first hundred pages or so floundered a bit, with extensive detail but not enough focus. The jargon is foreign to me and I puzzled over talk about ministry and witnessing. It got much better once she was more entrenched in the church and her social group, and as she reflected on what she learned from her experiences. Because she had become so involved she ultimately had to come clean with those she had deceived which was an awkward, even terrifying, proposition. But she did it and is still close with one friend, called Alice in the book, who was understanding enough to forgive her deceit.

Once I got into the book I found it very interesting, and also comforting. Welch accomplished what she set out to do, putting human faces on the label of evangelical Christians and showing that they are not all the same, and not so different from the rest of us.

The reviews on Amazon are worth reading. Though many reviewers dislike that Welch deceived church members, had she been honest from the start her experiences would have been different and I don’t think she would have achieved such insights. Interestingly, these reviews led me to a book called The Unlikely Disciple, in which a college student spends a semester undercover at Liberty University, a college associated with Thomas Road Baptist Church. Coincidentally, he was there at the same time that Welch was undercover at Thomas Road. Have any of you read that book? I wonder how the two compare.
Posted by 3goodrats at 9:46 PM