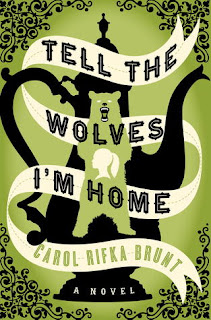 June's favorite person in the world, the only person who understands her, has just died. It's 1987 and her Uncle Finn had AIDS, a new and still mysterious disease. It's only after his death that she learns about his "special friend" Toby, who her family blames for Finn's death but who is the only person June thinks would understand what she's going through. Her sister Greta certainly doesn't. They used to be so close, but now Greta is wrapped up in the school production of South Pacific and the drunken cast parties she attends after each rehearsal. Their parents are both accountants consumed in the flurry of tax season. June is just left with Finn's last portrait, a very special teapot, and perhaps a new friend in Toby.

The story was told from June's perspective and she was such an easy character to slip into, especially since the first person narration was just so fantastically crafted. She had an interesting perspective and could be insightful without being philosophical. She loved to traipse through the woods wearing her Gunne Sax dress and big boots, pretending she lived in medieval times. (Oh, how I wanted a Gunne Sax dress in the 80s!)

But June was so wrapped up in her own life and memories of her relationship with Finn that she failed to see that while she was star of her own drama, everyone around her was similarly the star of their own lives and not just her supporting cast. A lot of things she loved about Finn he had actually picked up from other people, and it was startling when she began to realize that. It hadn't occurred to her that her mother was Finn's sister, and had a whole lifetime of memories and experiences with him. She was also dismissive of Greta's problems, which were just as serious as her own, possibly more so. I loved the relationship between June and Greta - it was complicated and wonderful and heartbreaking and even a little scary.

I could go on, but this book is a treasure that you should discover for yourselves. Even the cover is wonderful and perfect. I just can't say enough good things about it.
Posted by 3goodrats at 4:32 PM