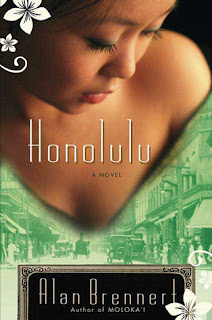 In early 20th century Korea, girls had little value and some parents would name daughters accordingly. This story is about a girl named Regret. Longing for more than her confining life allowed her, Regret traveled all the way to Hawaii as a picture bride in hopes of education, happiness, and a better life. But her new husband was a drinker and a gambler with a bad temper. Not willing to settle for a life worse than the one she just escaped, Regret left her husband, renamed herself Jin, and set out to live the life she wanted.

Jin's abusive marriage wasn't the end to the trouble she and her fellow picture brides faced. Through it all, what struck me most was the kindness that the characters exhibited and the generosity they showed. The relationships between Jin and the other picture brides were quite touching.

Honolulu is not a long book, yet I'm amazed at how much story is contained in its 350 pages. It covered a very long period of time and so many things happened, yet it never felt rushed. Description and details aren't omitted either; in fact, it's incredibly atmospheric. It made me want to eat my way through Asia and the Pacific.

Most fascinating is the history. I know little about Korea, and I expected the position of women at that time to be poor, but I was truly surprised when Regret explained that women had to cover their faces with veils when they went out. Girls were allowed no education, little choice about who to marry, and were expected to always defer to their husbands. No wonder leaving for unknown shores to marry a stranger seemed so appealing.

I've been wanting to read this ever since I read the author's other novel, Moloka'i, and though that novel is no longer fresh in my mind I think Honolulu compares quite favorably. They are both fascinating stories, beautifully told.
Posted by 3goodrats at 1:32 PM

Goodreads keeps recommending this book to me but it's quite hard to get a hold of here. Seems I am missing out on a good story!

Oh no! Well, if you're ever able to get it, it's definitely worth it. Keep an eye out for Moloka'i as well!