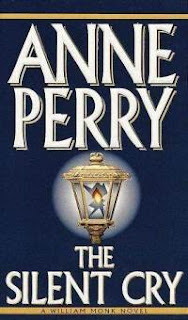 Policeman John Evan finds two men in an alley, one dead and one gravely injured. They aren't from this dangerous part of London; they were a father and son from a nicer area, and Evan sets out to find out why they were in such a neighborhood and who was responsible for these crimes. The son, Rhys Duff, regains consciousness but is unable to speak. His mother hires a nurse to help care for him as he recovers from his serious injuries. The nurse, of course, is Hester Latterly. Meanwhile, William Monk - the star of this series - is conducting an investigation in another bad part of town, determined to find out who has been beating and raping prostitutes. He knows nobody would ever be convicted of mistreating prostitutes, but if only he can find out who it is the people of that neighborhood may seek their own sort of justice.

The eighth in the William Monk series of Victoria-era mysteries, this novel has similar appeal to the others. But it seems to contain even more examples of injustice. No judge in this society will convict someone of raping a prostitute, and everyone knows it. Rhys Duff, a victim himself, begins to look like a possible villain but he can't speak - and both of his hands are convenient broken, so he can't even express himself in writing. I was surprised when he had to appear in court anyhow, without the ability to tell his side of the story or defend himself in any way. As usual, we learn the truth at the very end and in this case it was an uncharacteristically horrifying ending that I just did not see coming. Yikes.

Hester is the main reason I read this series, and I was happy that there was a lot going on with her in this story. In addition to nursing Rhys Duff, she was having a bit of romance. In reading descriptions of later books, I know that she ends up married during this series and I'm rather eager to get to that, which will be soon. A strong, independent woman, I can imagine that her courtship and marriage won't be a conventional Victorian one and I'm quite looking forward to it.

Hester's ascerbic wit really makes this series. For example, in one memorable scene she is meeting Rhys's friend Duke, who gravely underestimates who he is talking to. Seeing her carrying a book on the history of the Ottoman Empire, he assumes she was taking it to Rhys. Sensing his assumptions on what would interest a woman, Hester tells her of her impressions of the people and culture of Istanbul from her visit there. Duke recovered from his surprise and went on:

"Is there much call for domestic servants in Istanbul? I would have thought most people would have employed natives, especially for fetching and carrying."
"I imagine they do...I was too busy to think of such things. I left my own lady's maid in London. I did not think it was any place for her, and it was quite unfair to ask her to go." She smiled back at him. "I have always believed consideration for one's servants is the mark of the gentleman...or lady, as the case may be. Don't you agree?"
"You had a lady's maid?" he said incredulously. "Whatever for?"
"If you ask your mother, Mr. Kyneston, I am sure she will acquaint you with the duties of a lady's maid," she answered, tucking the book under her arm.

Hester is used to being underestimated, and having her duties as a nurse relegated, in some eyes, to that of a housekeeper. She always responds quickly and cleverly and I enjoy every minute of it. If only I were so clever myself.

Upon finishing The Silent Cry, I really wanted to move right on to the next one (which I bought in used paperback at the same time) but I have a couple of other books I need to get to first for book groups. Hopefully soon though, I've been moving through this series far too slowly!
Posted by 3goodrats at 9:00 AM