Lost in Shangri-la: A True Story of Survival, Adventure, and the Most Incredible Rescue Mission of World War II by Mitchell Zuckoff (2011) 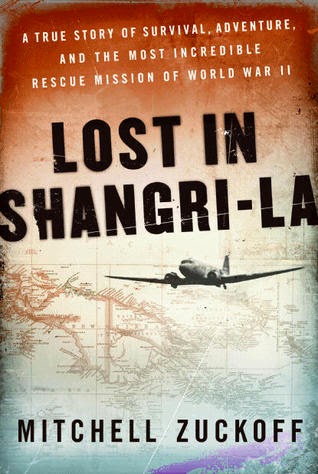 Near the end of WWII, a group of military personnel went for a sight-seeing flight that ended in tragedy when their plane crashed in a remote area of Dutch New Guinea (present-day Papua.) The three survivors then had to cope on their own among indigenous people who had never before encountered outsiders, while awaiting an uncertain rescue.

Most aboard the plane were WACs (Women's Army Corps), accompanied by just a few men. Of the survivors, two were badly injured. Ken Decker suffered a head injury and burns on his backside. Margaret Hastings had burns on both legs; her burns as well as Decker's soon turned gangrenous in the hot, damp jungle weather. Only John McCollom was in physically decent shape.

The area where they crashed was in a valley between steep cliffs with no place for planes to land, and the altitude made helicopter rescue impossible too. Hiking out would mean either going towards hostile natives, or toward Japanese troops, neither of which were feasible options. The two injured survivors were in no condition for a long hike anyhow. Luckily, the people they encountered weren't the head-hunters or cannibals they had heard stories about, because they were going to be stuck with them for a while.

This book has been on my To Read list for a couple of years now, and I just kept putting it off. It always sounded interesting and I definitely wanted to read it...but some other time. I had been afraid it would be long and dry, but I couldn't have been more wrong. Zuckoff's style was engaging and he told this exciting story well. There was just enough background without going off too far on tangents - a common pitfall of this type of book - and I felt like I got to know the major players in the story quite well.

The bravery of all three survivors was commendable, and I always especially like to hear stories of strong women in a time when women weren't appreciated for qualities unrelated to marriage and motherhood. Margaret Hastings was condescended to a bit (like when cargo drops included lipstick, of all things, when what she really needed was just some underwear), but she came across as strong and adventurous and quite admirable.

Because of language and cultural barriers, a number of misunderstandings occurred between the natives and the newcomers. One that stood out related to how the men dressed. The local men wore nothing but penis gourds, which are basically what they sound like. They kept touching the newcomers, and the white men grew irritated with this behavior and, thinking it was because they were wearing clothes, they stripped and just hung out naked for a couple hours. Turns out the natives were rather taken aback by their nudity (apparently they consider their gourds modest outfits) but had been touching the men because they had never seen clothes before and were intrigued by their second skins.

Zuckoff kept pointing out the prejudice of the white people towards the natives, but I actually thought they were pretty open to learning about these people who lived very different lives from them. The two groups did cultivate friendships of sorts, and seem well-intentioned. Learning about the Dani tribe through the eyes of their unexpected guests was fascinating, and the author helpfully added information learned later through interviews with members of the tribe. He also talked a little about how their ways changed after this visit from the outside world.

Lost in Shangri-La was a great adventure story. The aftermath of this crash was harrowing and exciting, but rather lost in time as it was overshadowed by the larger events of World War II. Zuckoff clearly did his research and made the story into a compelling page-turner. I'm so glad I finally picked up this book, and perhaps I wouldn't have if I hadn't chosen it for my TBR Pile Challenge. After putting it off for so long, I'll never understand why I chose the night before a vacation flight to suddenly begin reading this book about a plane crash, but I was captivated, even while up in the air.
Posted by 3goodrats at 6:47 PM