The Clockwork Scarab by Colleen Gleason (2013) 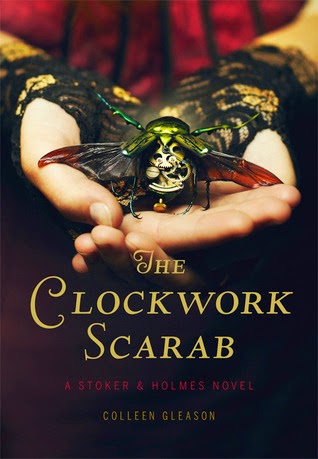 Mina Holmes and Evaline Stoker are mysteriously called to a meeting at the British Museum at midnight, where they are asked to investigate the deaths of two London society girls. The case, which takes them through the streets of an alternate London, involves steam technology, ancient Egyptian rituals, and time travel. The niece of Mina Holmes and the younger sister of Bram Stoker must channel all their strengths to thwart a dark figure's dangerous plans, and prove they're worthy of their family's reputations.

This is the first steampunk fiction I've ever read, and I really liked those aspects of the story. If you're not familiar with steampunk, it is basically the way that people in the 19th century would view the future. So there are a lot of high-tech machines but they are mechanized rather than digital, and there are flying machines but they are airships rather than airplanes. There's a particular style to it all too (a Google image search on steampunk would give you an idea). The author Holly Black once described it quite aptly, saying "Steampunk is what happens when goths discover brown."

In the world of Stoker and Holmes, electricity has been outlawed, and everything runs on steam. Buildings are so tall they sway, and sky-anchors float above them to keep them stable. London is built up vertically in addition to horizontally, with several levels of walkways. The best businesses are on the upper levels, and pedestrians must pay to rise up to those levels. Some of the clothing sounded extremely stylish as well - at one point Mina Holmes was wearing a dress in alternating panels of brown and rust, all embellished with pocket watches and clockwork gears. I found it all utterly fascinating and would love a movie version just for these visuals.

Unfortunately, the story didn't quite live up to the world it inhabits. I liked it, it was good, but it didn't knock my socks off. At the very beginning a visitor arrives from the future accidentally, which could have been quite interesting, but he was almost completely superfluous. There were a couple of other characters, too, who weren't brought into the story as much as I expected. But this begins a series and I wonder if there are more plans for these characters. If so, I think they may have arrived prematurely.

Nonetheless, I found much to like and I'm curious to hear what people think of the follow-ups. It's a great premise, and I found the characters of Mina Holmes and Evaline Stoker to be quite promising. They are smart and strong, and lock horns enough that working together as a team could be both thrilling and exasperating. I'm not sure whether I'll try the next one in the series, but it may well be worth checking out.
Posted by 3goodrats at 9:11 AM