Delicious Foods by James Hannaham (2015), narrated by the author 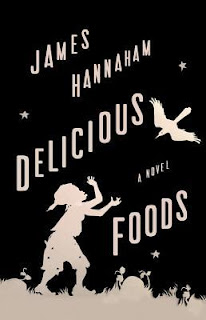 The story opens with a teenaged boy named Eddie escaping a farm where he has lived for six years. He's driving a car but has no hands, his stumps bleeding through the makeshift coverings. Eddie has been living and working alongside his mother Darlene at a company called Delicious Foods, where they have basically been held captive since they were hired. Eddie drives to his aunt's house in Minnesota where he becomes the Handyman Without Hands. The story pauses and goes back to the beginning, telling us the whole story about Eddie and Darlene and how they came to be where there are.

Darlene is a crack addict, falling prey to drugs because she was so distraught after her husband's death. Then she fell prey to Delicious out of desperation brought about by being a crack addict. Crack, also called Scotty, is its own character here, narrating some of the chapters. They're told in a rough street voice that is both friendly and funny, narrating Darlene's life as though she is a close friend.

Darlene is college educated, and as I mentioned earlier, only turned to drugs after her husband was killed. She is racked with guilt because he died after going out for Tylenol that she requested though, of course, his death is not her fault. But I find it interesting that the author chose to make her an educated woman who was an upstanding citizen until something tragic turned her into an addict. Is this supposed to make it more ok to become a drug abuser than someone who simply makes a few poor choices? Are we supposed to be more sympathetic to her because of it?

An obvious theme here is modern-day slavery. Delicious Foods is clearly a sketchy business, and they treat their workers horribly. Basically a van goes out and finds really vulnerable people on the street, convinces them to sign a contract for this great job opportunity, and then whisks them away to a farm far enough from civilization that it's hard to leave. The workers are paid very little, and are charged for room and board and every little infraction of the rules possible. There's no way to earn enough to get out of debt with the company, and corporal punishment is common. Also common? Crack. They like their employees to be weak and muddled. I don't know how many of the employees are black (though Eddie and Darlene are) and I'm not certain that the owners are white, but I think they are, so the racial implications are obvious. I am also horrified to think that this could exist in modern America, but I fear it is all too true. (According to the New York Times review, it's based on a real case.)

When I first listened to a sample of the audio, I was hesitant. It's obvious that Hannaham is not a professional narrator. But as I got going, I really came to appreciate how he reads his story. His talent especially shines through as he switches between the third person narration of Eddie's story, and the chapters narrated by crack. Those are in a sort of street dialect that not just anyone can pull off. He really gets the tone just right, which I suppose is one advantage of reading one's own work.

Delicious Foods isn't really the kind of story that you enjoy exactly, because it's really just one bad thing after another happening to these people. It is, however, very well told and you will want to keep reading. The writing style is maybe not for everyone. There's lots of swearing, and lots of the n-word in the dialogue. As I've mentioned some parts are pretty funny, but the overall story is not one that is enjoyable to be immersed in because it's so upsetting. But you will become immersed and not soon forget Eddie or Darlene.
Posted by 3goodrats at 7:30 AM