The Home-Maker by Dorothy Canfield Fisher (1924) 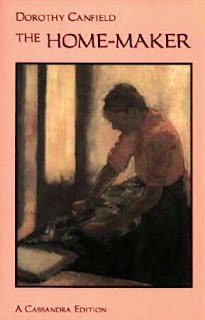 Evangeline Knapp runs a tight ship in her household. She is devoted to keeping house, throws herself into it, and prioritizes it over all house. But she doesn't really enjoy her domestic duties or spending time with her kids; it's more that she likes managing the work. Her husband Lester works at a department store in town, but he isn't interested in his work. Often, he is thinking of poetry when he's supposed to be thinking of numbers. When tragedy strikes, the two find themselves switching roles, and the results are surprising. Or maybe not.

This isn't a particularly complicated or nuanced story, but I really loved reading it. I first heard about it from a post on Shelf Love, and was drawn to the surprisingly modern take on marriage. I was surprised at how modern. At one point Lester Knapp has this epiphany: "Why, the fanatic feminists were right, after all. Under its greasy camouflage of chivalry, society is really based on a contempt for women's work in the home." Sadly, that idea is just as fresh today as I imagine it was then. Many of the issues in this novel regarding domestic life are still being debated. I don't know if that's a statement about how forward this author is, or how backwards we are today, but I suspect it's a bit of both.

When Lester Knapp is greviously injured - in a possible suicide attempt after being fired - Eva goes to his store to ask for a job to support the family now that her husband cannot work. She doesn't know that just before his accident he was fired and his boss doesn't let on, but he knows that Mrs. Knapp is more interested in the work than her husband ever was. She positively thrives and wants to learn everything she can about her new job, at which she quickly excels. Meanwhile, as soon as Lester is healed from his injuries he takes on many of the domestic duties she despised and finds great satisfaction in them. He has a way with the children, who he has taken the time to finally get to know, and even begins darning socks and cooking. Mysteriously, several family members have suddenly recovered from chronic conditions like eczema and stomach ailments that plagued them for years, and the youngest child leaves behind his serious behavioral issues.

Written in a straight-forward simple style, it retains one of my favorite features of books from that era: dialogue tags. I don't know why current literature is so determined to obfuscate who is speaking, but it drives me bananas. Here, they even include adverbs. One of my favorites was "'He would!' ejaculated Jerome, pregnantly." So quaint! (I swear they weren't all so ridiculous sounding.)

Other charming historical details included how free with information Dr. Merritt was in discussing Lester's condition with everyone in the neighborhood. How ripe with possibilities were stories pre-HIPPA! Similarly, Eva found out as much about her customers as she could (which would make her seem positively stalker-ish today) and would contact them to let them know if the store got something new they would like. What great service!

I really found everything about The Home-Maker delightful, and I'm so glad I happened to stumble across a blog post about it. It's not well-known, and in fact I ended up purchasing a copy because there's only one in my whole library system and I can imagine what sort of condition it's probably in. Sometimes old books make me want to read absolutely nothing except old books.

This was on my list for the TBR Pile Challenge, which I've been grossly neglecting. It's only the eighth one I've read, so obviously I won't be finishing all twelve by the end of the year. In fact, I've rather lost interest in a few of them, but I feel strangely complacent about my failure. Let's see if I end up squeezing in one more from my list before the end of December!
Posted by 3goodrats at 7:30 AM

This does sound lovely! I'm going through a bit of a "old books" phase at the moment - I think it might be seasonal. There is something about cold weather that sends me towards classics!

Me too! I totally want to read old-timey things in the winter.