The Library at Mount Char

The Library at Mount Char by Scott Hawkins (2015) 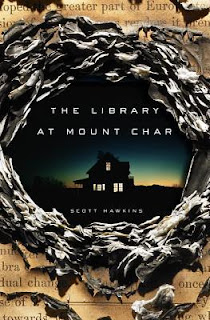 The old neighborhood isn't what it used to be. On a day that Carolyn only remembers as "adoption day" she was taken to live with a man known as Father. She and the other children used to have regular parents, but they're all dead. The entire neighborhood is now inhabited by these "dead ones" who go about their daily lives, repeating automatic motions and saying the same phrases over and over. Father and his children (who became known as librarians) lived for years at the Library, but now he's missing and the librarians can't come within a certain radius of the house. Carolyn is resorting to going in the surrounding areas and fraternizing with Americans for help. If this all sounds confusing and strange, it is.

Each of Father's children is devoted to one particular catalog, or subject area. Carolyn's is languages, so she knows every language that has ever existed. Michael's is animals, so he spends most of his time out in the wilderness acting as the animals do. Jennifer's catalog is healing, and David's is war and murder. In all there were twelve children, one for each catalog, and each was forbidden to read from another's catalog. Their relationships with one another were weird and volatile and it wasn't unusual for one to murder another. Did I mention the resurrections? Jennifer, the healer, could bring anyone back to life, so even murder didn't necessarily ruin a relationship.

There's a lot to this story and it's hard to know even what to talk about. The story sounded great when I heard about it, especially with the library theme, but I think it was the gorgeous cover that ultimately drew me in. I first read about it in the horror section of a review journal and there's not enough horror out there so I was very happy to hear about a horror novel from a new author. I'm using a loose definition of horror here; it might be more fantasy, and it's definitely weird and strange but wasn't terribly scary. At least not until late in the book. I read a blurb that said it was like if Neil Gaiman and Joe Hill wrote a book together, and I think that was a very apt description.

The whole idea is very unusual. The characters live in a strange world that exists within ours. Our world is what it is, but all this is happening too, (mostly) unbeknownst to regular people like us.  So much happens here! The story gets bigger and bigger as it goes on, which sort of reminded me of 14 by Peter Clines, though the story itself is pretty different.

The characters were really screwed up and some were kind of scary, but I also felt really awful for them. David was very happy and fun-loving as a kid until he was made into a murderer. Because the librarians aren't really in tune with American culture, he spends much of the book dressed in an Israeli flak jacket and a pink tutu, but it doesn't make him less cruel or terrifying.  Michael can barely speak because he's most comfortable communicating with animals. He's very sensitive and has the closest relationship to Carolyn. Margaret spent a ton of time in the forgotten lands, which is where dead people go, I think. She was murdered again and again and stank of rot from being dead so much. She and David were romantically involved (though "romantic" doesn't seem like the right word) and they were really into rough sex. As in, they would need to be resurrected afterward. Jennifer, the healer, was high all the time. I loved Carolyn - she was smart, strong, and calculating. I really underestimated her at first, as did everyone else in the book, I think. She was the one who most understood American culture, but even so she was clearly not part of our world. Another great character was Steve, a regular guy who Carolyn ended up bringing into their situation and I really liked seeing his perspective on this whole crazy business.

This novel is just really frigging weird, and I mean that in the best way possible. I was fascinated by this world, and never knew what would happen next. This is the author's debut novel (his past books are all computer manuals) and he is working on more. According to his website, the next novels are called Dog Blog and That Isn't a Giraffe, and I'll definitely be keeping an eye out for them. If you like horror or dark fantasy, you should definitely consider trying The Library at Mount Char.
Posted by 3goodrats at 7:32 PM

Great review. I read this when it was released and found it hard to put into a review as well. I wasn't sure I was liking it as I was reading it, but once I finished, I was pleasantly surprised at how much I enjoyed it. It is a really messed up book though and I usually end up recommending it lightly because I think some would be very put off by it. I enjoyed hearing your thoughts and just found your blog!