Hand to Mouth: Living in Bootstrap America by Linda Tirado (2014) 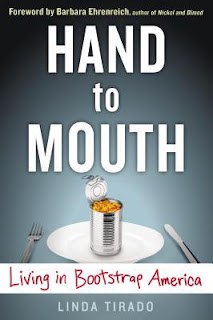 Late one night, Linda Tirado was scrolling through an online forum when she saw the question "Why do poor people do things that seem so self-destructive?" Tirado was well-versed in being poor so she answered the question as best she could. Her response went viral. Her words eloquently explained what it means to be poor in America, all its inconveniences, and what is necessary to get by when you don't have much. She has expanded her off-the-cuff essay in this book, Hand to Mouth.

Full of her own experiences and observations, Tirado lays it all on the line simply, but with humor. She also doesn't hold back her own mistakes, fully owning up to poor choices she has made. As she points out, we are all human and all of us make bad decisions now and again or do things that aren't good for us.

Tirado has moved in and out of poverty, an experience that is probably more common than we think, and has learned a lot along the way. She makes some really good points.

For instance, the way we tend to judge poor people for having kids they can't afford. I do it too. (I've judged my own parents for having 5 kids on such a low income.) But Tirado points out kids don't actually need all the crap their wealthy parents buy them, or sign them up for, that what they really need their parents to do are build pillow forts with them or play outside in the mud. Of course she's right. Kids actually don't care if they have the latest toys if they haven't been taught that they should want them.

Another point she makes is that when poor people spend money on things like cigarettes and booze and junk food, it's because they also deserve a bit of pleasure every day. Why should they scrimp for their whole entire lives? At the beginning of the book she says "It is not worth it to me to live a bleak life devoid of small pleasures so that someday I can make a single large purchase." That makes a lot of sense. Any amount of saving up doesn't make you not poor anymore. You might as well get whatever pleasure you can out of life.

It's true that she lumps all "rich" people together, but then again don't we often lump all of the "poor" together as well? She makes fun of rich people a bit, but it's not mean-spirited and all of her criticisms are totally fair.

Short, conversational, and easy to read, this whole book was under 200 pages and there was a lot of white space, but it contains SO MUCH food for thought. A colleague picked this for a book group that I'm not actually able to attend, but I wish I could because I feel like we all need to talk more about poverty. This book is similar to Nickel and Dimed by Barbara Ehrenreich, but up-to-date and more authentic. It's also a great complement to Matthew Desmond's Evicted, which I recently finished.

There are a lot of books about poverty and economic inequality being published right now. A couple of others I'm interested in are White Trash by Nancy Isenberg and Hillbilly Elegy by J.D. Vance. Are there any others that I should be keeping an eye out for? Let me know in the comments!
Posted by 3goodrats at 9:05 PM