Evicted: Poverty and Profit in the American City by Matthew Desmond (2016) 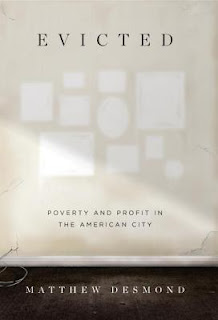 You may have already heard about this new book that investigates landlords and tenants in Milwaukee. It's gotten a lot of press since even before it was released a few months ago. I wasn't planning to read it, but for some reason impulsively put it on hold at the library. I am interested in the current state of income inequality in the US, and this is obviously pretty related.

In this book we meet a number of real people who are struggling unsuccessfully to stave off eviction. Arleen and her two sons, a nurse-turned-drug-addict named Scott, a few generations of the Hinkston family, and others. We also become acquainted with inner-city landlord Sherrena Tarver and trailer-park owner Tobin Charney. Desmond follows all of them for a few years, really delving into their life stories, motivations, and challenges.

It's very easy to point fingers at people for not taking responsibility for their lives, and there were definitely some people in this book who made poor life choices. But the impossibility of coming back from one bad choice is overwhelmingly difficult, and even people who tried to do the right thing but just had bad luck seemed to be punished over and over. The fact is that housing is incredibly expensive in this country, even in the slums. And although the landlords were making money off of the poor people, it didn't seem (at least in Sherrena's case) that she was trying to gouge people.

I learned several rather startling things in this book. For one thing, I didn't realize how few poor people are able to get subsidized housing; most are stuck in the regular rental market, which can be impossibly expensive. I also learned about "nuisance violations," which mean that a landlord is liable if one of her properties has 3 or more 911 calls in a certain period of time. The result is usually evicting the people who made the calls. This puts victims of domestic abuse in a very precarious situation, even resulting in them not calling 911 when they should. I don't have to tell you how dangerous that is. Arleen was evicted one time in part because of a 911 call she made when her youngest son was having a bad asthma attack. I also hadn't ever thought about how much evictions can affect other aspects of a family's life. For instance, Arleen's kids had attended 5 different schools in the course of 2 academic years, which isn't setting them up for success. Having to move suddenly also means unplanned time off work, which can result in losing one's job. Frequent changes in address also meant that one person in this book stopped getting welfare benefits at all and became dependent on a food pantry to eat.

Luckily, Desmond does end on a positive note, providing an idea for a housing voucher program that could prevent most of these situations. I'm under no illusion that this will ever happen in the United States, because for some reason we are pretty uninterested in helping the poor. But I like knowing that it's possible.

For a nonfiction book, this one was pretty accessible. Because it focused so much on real-world stories it was easy to understand. My only difficulty was that because Desmond switched back and forth between the stories I had a hard time keeping track of the different peoples' stories. I don't understand why authors are so allergic to just telling a story from start to finish. It would have worked much better for me to tell one person or family's story at a time. Many readers are probably more astute than me though and will have no problem following the stories in this book.

If you're interested in the problems of America's poor I think you'll learn a lot from this book. I really think that income inequality is the biggest problem we have in the US, and that most of our other problems are directly caused by it. I'm also really interested in Nancy Isenberg's White Trash, and Dreamland: The True Tale of America's Opiate Epidemic, which is arguably related to poverty. Have you read anything recently addressing similar topics that you could recommend?
Posted by 3goodrats at 7:30 AM