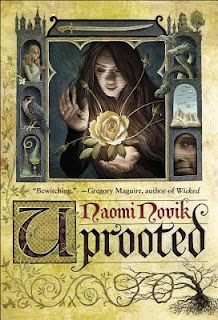 In the village of Dvernik lives a young woman named Agneiszka, near the edge of the evil Wood. Guarding all the people of the valley from the Wood's power is a wizard called the Dragon. But the people of Dvernik pay a high price for his protection: every ten years he plucks a young woman from the village who he keeps for ten years until he sets her free and chooses another. Agneiszka dreads the choosing, not because she fears being taken, but because they know that her best friend Kasia will be the unlucky one. She is the smartest, most beautiful, most talented, and she has been preparing for her fate for her whole life. But to everyone's shock the Dragon picks Agneiszka.

Inspired by fairy tales and the story of Baba Yaga, this story has many fantastical elements. Girls locked in towers, spells, a magic wood - but unlike many traditional fairy tales, Uprooted has a complicated plot that makes sense, and great character development. When Agneiszka is first taken to the Dragon's tower, it reminded me a little of Beauty and the Beast (just without the talking teapot.) But as Agneiszka begins to learn about her own powers, and the full implications about the power of the Wood, things got much more interesting.

The most enjoyable part of the novel might be the lush, descriptive writing. It's easy to get lost in Novik's descriptions of the spells, the tower, the Wood, everything that Agneiszka sees, tastes, or smells. Here is the description when she enters the Wood:

"The trees were great pillars in a dark endless hall, well apart from one another, their twisting gnarled roots blanketed in dark green moss, small feathery ferns curled up close for the night. Tall pale mushrooms grew in hosts like toy soldiers marching. The snow hadn't reached the ground beneath the trees, not even now in the deep of winter. A thin layer of frost clung to the leaves and fine branches. I heard an owl calling somewhere distantly as I picked my way carefully through the trees."

"I should have been spent. But magic was still alive and shivering in my belly, too much of it with nowhere to go, as if I were an over-ripe tomato that wanted to burst its skin for relief, and there was an army outside our doors."

I also loved the setting, which I suppose is a magical version of Eastern Europe. The power of the Wood was super creepy, with heart-trees that wrapped themselves around victims and held them there forever, not quiet dead, but not alive either. Those who escaped the Wood were still corrupted, but it wasn't always obvious until people around them began hurting themselves or others. The images of the Wood's reach are dark and haunting and I won't soon forget them.

This novel is sometimes tagged as being young adult, but I'm not sure whether or not it is. Agneiszka is a teenager when the story opens, and I think teens who like fantasy would probably really enjoy this book. At the same time, parts of it felt pretty dense, and at one point in the story I began feeling a bit bogged down by everything that was happening. I had to force my way through for a while until I started feeling the forward momentum again. I don't know if that was me or an issue with the pacing of the book, but either way it luckily didn't last long.

I don't normally pick up fantasy books, especially those that are based on fairy tales, but I kept hearing such good things about Uprooted that I didn't want to let it pass me by. It's a great story to lose oneself in, and I found it quite enjoyable and satisfying.
Posted by 3goodrats at 7:30 AM

I absolutely adored this book! I read it a couple months ago and it's one of my favorites of the year. Like you, I loved the characters, the rich setting and the great writing!