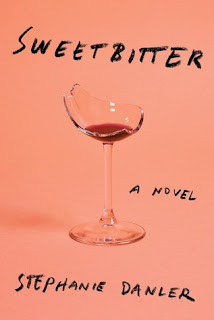 Twenty-two-year-old Tess comes to New York and finds a job in a well-known restaurant in Union Square. It's competitive and merciless, but she makes herself part of the restaurant and the odd family of people who work there. Among the busyness of the restaurant - both choreographed and chaotic - she learns about food and especially about wine, and develops an obsession with the bartender, Jake, and a slightly different kind of obsession with a server and Jake's close friend, Simone.

The story was told in first person by Tess, whose name I don't think was mentioned until about 200 pages in. Her coworkers had a series of nicknames for her: The New Girl, Fluffer, Skipper, Baby Monster. It takes place over the course of the year, told in four parts for each of the four seasons. There's not much of a plot, and maybe a little character development thought I still don't really know Tess. It's more slice-of-life, and I liked it, getting inside the world of this shmancy restaurant in New York. The prose is pretty straight-forward, but sprinkled through here and there was a page that looked like poetry, but was actually random snippets of conversation. I liked these parts, the conversations all running together in a cacophony of voices speaking all at once.


What's interesting is that the novel begins with Tess's arrival in New York and is entirely focused on her experience working in this restaurant and her relationships with her co-workers. We know that she's from a small town somewhere (eventually her home state is revealed as Ohio), but we know nothing about her life before she came to New York. She mentions a family so we know she has one, but we know little about it. Nor do we know anything about her interests, her hopes and dreams, her past experiences with anything at all.  It all gives me the feeling that her life is entirely consumed by her job at the restaurant, which I imagine is how it feels to her. It all painted a pretty vivid picture of her experiences, so vivid that during one passage describing a frenetic shift I felt incredibly anxious.

I also moved to a new place when I was 22, and got a job that was really hard and time-consuming and exhausting and ate up my life, and I did little outside of work, and I eventually left under circumstances that were in some ways similar to Tess's. (But not too similar - let me just make that clear.) So now that I think about it, part of the reason this book felt a bit stressful is because it felt so real to me, although in my case I didn't socialize with my coworkers and there was no drinking or drugs at my job (though it might have improved things.)

I didn't especially like Tess, but I was sympathetic enough to her. It's not her fault that she's only 22. She was young and naive and became completely caught up in the life of the restaurant. At times I cringed at her behavior, especially toward Jake and Simone. The two were very close and Tess was constantly trying to suss out their relationship. She made a fool of herself in other ways too, drinking so heavily she would be sick all over herself, and it seemed like the only reason the others weren't put off by this is because they had probably been the same way once.

This was a book I heard about around a year ago from the Books on the Nightstand podcast, so I've been looking forward to it for quite a while. It's been very popular, with hundreds of people on hold at the library, yet it doesn't strike me as the sort of book that would be insanely popular for some reason. The Goodreads rating is fairly low, and it's a bit literary in that it's not plot-driven. The strength of the novel is more in how the story is told than the story itself, but although Tess is not super-appealing and we don't know much about her, she feels very real. Possibly because it's based heavily on a period in the author's own life.

I didn't love it exactly, but I liked it well enough and I think it does stand out in its uniqueness. As I write this, I'm starting to like it more than I did when I finished, so I think it might really lend itself to more thought and discussion than I originally gave it credit for.

Have you read it? I'd love to know your thoughts!
Posted by 3goodrats at 7:30 AM