Do you know what time it is? It's time to start thinking about 2017 reading!

I've been thinking that I haven't read many classics this year - it was my year of Shakespeare, but I think those few plays were the *only* classics I read - and was considering making an effort to read more next year. Then I saw the announcement for.... 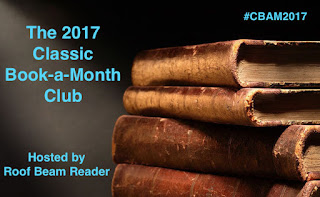 Hooray! This is hosted by Adam at Roof Beam Reader, who has compiled a monthly schedule made up of classics he wants to re-read and some that he's never read and is asking people to join in. Sign me up!

Now, I'm not planning to read everything on the list. I already have a book group book to read every month and tons of other books I want to read. But there are several on the list that I definitely want to read and others that I will seriously consider.

March: The House of Mirth by Edith Wharton

April: Tender is the Night by F. Scott Fitzgerald

May: A Raisin in the Sun by Lorraine Hansberry

June: The Confidence-Man by Herman Melville

September: Death Comes for the Archbishop by Willa Cather

I'll likely participate in March, April, May, and December. None of the months are completely out of the question, except maybe July. (A 400+-page epic poem? Dear god, no.)

Specifically I am super determined to read Tender is the Night because I've wanting to for years and haven't managed to make it a priority (despite having it on my TBR Pile Challenge.) I've also been wanting to re-read Wuthering Heights because I read it maybe in my 20s and only remember that I really liked it. I also really liked The Age of Innocence and loved Ethan Frome so I'd love to also try The House of Mirth. I just read Northanger Abbey less than a year ago and it's too soon to re-read but I might make a point to read another Austen novel in August.

While I'd love, in theory, to reread The Brothers Karamazov someday, I don't know that it will happen in 2017 but I'll definitely keep it in mind. Several others on the list I'm mildly intrigued by and will consider. I'm hoping to expand my horizons by reading at least one that I'm totally unfamiliar with.

I'm really looking forward to participating!
Posted by 3goodrats at 9:24 AM

The House of Mirth is EXQUISITE! I hope you like it. :)

I'm also hoping to read Tender is the Night with you next year :-)
One of the Fitzgerald's I haven't got to yet.