Symphony for the City of the Dead

Symphony for the City of the Dead: Dmitri Shostakovich and the Siege of Leningrad by M.T. Anderson (2015) 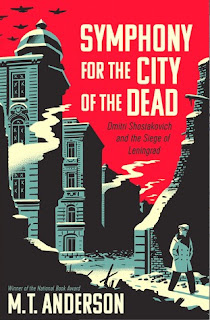 It's been over a week since I've posted about a book, and it's no coincidence that my last book post was the day before the US presidential election fiasco. I actually started this book a couple of days before but had too much anxiety to read, and that only increased after the results came in. It took everything I had to force myself to read this because Soviet oppression is exactly the opposite of what I actually felt like reading at the time. But it was for my book group at work and I'm glad I made myself read it because it was actually very good and we had a great discussion!

The Siege of Leningrad was a significant but often-overlooked part of World War II, and I imagine most people know little about the composer Shostakovich and the role of his music during that time. Anderson expertly weaves together two different threads; the political aspects of the war, and Shostakovich's life and music. The result is a rich, vibrant story filled with unforgettable imagery.

A lot is covered, so I will just mention a few things that stood out to me. One was the resilience of the Russian people. Last night at my book group someone mentioned that Russia is declining, and another person said "Yes, but it has always been declining." This speaks to something essential about the country, which is the determination and strength of Russia and its people to keep going even when everything is fighting against them. The Siege lasted for something like two and half years, Hitler's troops surrounding the city so nobody could leave and food couldn't be shipped in. Even while literally starving to death, the members of the orchestra came together to rehearse and perform Shostakovich's 7th Symphony. It's what kept them going. People who just huddled in their beds to conserve energy were the ones who died; those who kept active lived. When the Symphony was being performed, starving people gave up their daily rations to afford tickets. And in the end, Hitler lost.

Another part that stood out to me came earlier in the time leading up to the siege. Stalin and Hitler had communicated a bit and come to an agreement about how far each could send their troops, essentially divvying up eastern Europe. As Hitler's troops came closer and closer, many different people alerted Stalin, who refused to believe it was happening. He would contact Hitler, who would tell him that the reports was lies to throw him off and he should ignore them. Stalin believed him, much to his own detriment. This would be mind-boggling with any leader in a time of war, but even more so because Stalin didn't trust anyone. But he chose to trust Hitler.

Life for the Russian people in this time was filled with fear and paranoia. If you wanted to survive it was essential to toe the party line and make sure you didn't say anything that the government didn't approve of. This was incredibly difficult because it kept changing. This extended to artistic expression, so Shostakovich had to keep politics in mind with his music. We don't think of music without lyrics as expressing specific opinions, but it can be interpreted and not always in the way the composer intended. Shostakovich wasn't put in a good position at all. Of course we'll never know what he actually thought about anything since he couldn't speak freely, which is also addressed in the book.

Despite the fact that I was completely not in the mood to read this, I ended up liking it a lot and I'd highly recommend it. This work is pretty dense for a teen book, but not as dense as most adult non-fiction books, so it was just perfect for me. As you can probably tell from my stream-of-consciousness thoughts above, Anderson tackles a lot here. But it's necessary because so much is tangled up together that can't really be separated. There's no doubt that Shostakovich's music played a role during the Siege and exploring that requires looking at the larger context. It was fascinating!
Posted by 3goodrats at 12:33 PM

I've wondered about this book. I've been interested in the Siege of Leningrad since I read "Shurik the story of the siege of Leningrad" by Kyra Petrovskaya Wayne as a child. She does not write anything anti-Soviet, so some people had a problem with the book because of that, but she vividly conveyed what the experience of living in Leningrad during the siege was like, from the viewpoint of a nurse who took in an orphan named Shurik. It made the Siege of Leningrad so real for me.
I love classical music, so I definitely have to read this one. I can see how reading it during the election was not the best time for reading this book!

If you like audiobooks, I've heard this one is very good and includes passages of the music discussed in the book.